Luke Wilson came by to talk to Kelly Ripa and Michael Strahan about his movie The Skeleton Twins, which also stars Kristin Wiig and Bill Hader. It looks like an incredible movie with both hilarious and very dramatic moments. Wilson plays Wiig’s husband in the movie. From the trailer, they’re trying to have a baby, but Wiig’s not ready and is cheating on Wilson. Hader’s Wiig’s twin brother who suddenly comes back into her life. Wilson’s known for his roles in The Royal Tennebaums and Old School.

Wilson was actually shooting a movie in New York City recently. He just finished a movie called Meadowlands with Olivia Wilde. He loved that she was playing his wife. He’d see her in commercials and get really excited. 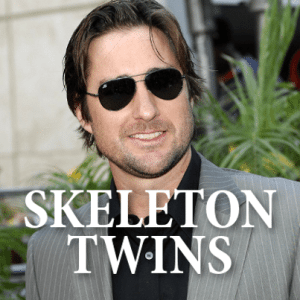 Luke Wilson talked about his new movie ‘The Skeleton Twins’ and why he still has a BlackBerry. (Everett Collection / Shutterstock.com)

Wilson’s from Texas, but lives in LA. His parents live in Dallas and he spends a lot of time in Austin. He loves Austin and there’s a lot of stuff that you can do outside, so he’s thought about going back there to live. Wilson brought up how Mark Consouelos says “Downtown Abbey” and how that made him remember how he could never pronounce Houston Street when he first got to New York. It’s a trick, and people looked at him like he was “a real hick.” He misses Texas though. People are more down to earth in Texas and it’s home and relaxing to him.

Wilson has two older brothers: Own and Andrew. They’re all famous. They grew up in the ’70s and ’80s and had a Tom Sawyer-ish upbringing. They grew up playing outside, but these days it’s all about staying inside and being “technically proficient.” They were “let out like dogs in the summer time” and were told, “don’t hurt anybody.” They lit a lot of things on fire and killed a lot of ant piles.

Wilson hates technology but his brother Owen’s been pressuring him to get an iPhone. He uses a BlackBerry now and didn’t know they were uncool until his 15-year-old nephew laughed at him. Owen gave him an impassioned speech about switching. It was basically a relationship speech where he told him he had to make a commitment. He does what his brothers tell him, so he got an iPhone and couldn’t get a handle on it, so he went back.

What does he do for music? CDs. I think that’s amazing. New York City still has record stores, which is great. “I need to get hip to all the new technology,” Wilson laughed.

Wiig and Hader play odd estranged twins in Skeleton Twins, while Wilson plays Wiig’s husband. He’s totally in love with her, but she’s kind of done with him and he doesn’t really know it. It was amazing to work with Saturday Night Live people, but he had to keep up with them. They were always going off, both on and off screen. Both twins were going through hard times on separate coasts in the movie, but they got back together when Hader moved in with them.

Skeleton Twins was shot mostly in Brooklyn, which was “hip,” which is absolutely true. Wilson was shooting in Brooklyn again yesterday, and it looked like they were shooting a TV show because everyone had yoga mats and beards and skinny jeans. They also had little tiny bowler hats and they make their own furniture. “It is pretty interesting over there,” he said.

In the clip of The Skeleton Twins, Wilson was explaining his toe shoes to Wiig, but she was getting pretty annoyed with his idiosyncrasies. The Skeleton Twins is in select cities now and will be playing nationwide on September 26 2014.