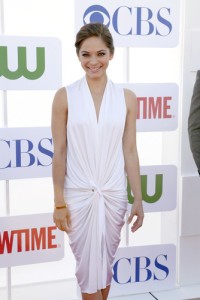 Actress Kristen Kreuk hadn’t been to Live! in about eight years, when she appeared to promote her starring role in Smallville. Kelly wondered, “What did Regis do to upset you so much?”

Four years ago, Kristen and three friends made a pact for “Wild Women Adventures”– WWA– that would find them traveling the world together. So far, they’ve made good on their promise, visiting a lot of incredible places. Their first trip was to Ecuador, and their second trip was to Syria and Turkey. Last year, two of Kristen’s friends were pregnant, so they had a more restful trip to Sedona, Arizona. This year, the whole gang– boyfriends, husbands, and kids– plan to head to Italy together.

Kristen’s new show on the CW is called Beauty and the Beast, and it finds her starring as Detective Catherine Chandler. The premise of the show revolves around Catherine investigating a mysterious, non-human creature who saved her life ten years prior, in an incident that killed her mother.

In order to play a tough Detective, Kristen had to learn to shoot weapons, which she doesn’t really enjoy. She said that she’s not so good at firing the guns. However, in an exciting clip from the show, in which she fights off two attackers in the New York City subway, it was easy to see that Kristen totally looks the part!

You can see Kristen Kreuk on Beauty and the Beast Thursday nights on the CW.