From Father of the Bride and According to Jim, actor Kimberly Williams-Paisley has graduated to drama in ABC’s Nashville, where she gets to show off her bad side for the very first time. She wore a beautiful dress for her interview with Kelly and Michael about her secret pregnancy on TV.

Williams-Paisley just had a birthday, and she is also celebrating her 10th wedding anniversary with Brad Paisley in Turks and Caicos. They brought back some shells for the kids, but it turned out that one of the mollusks was still alive, so the family temporarily had a new pet. 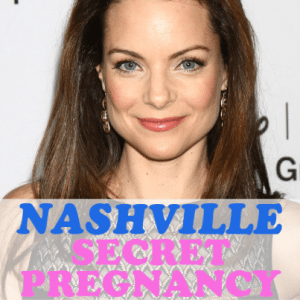 Kelly & Michael talked with Kimberly Williams-Paisley about her character’s secret pregnancy on the ABC drama Nashville, which shoots in her hometown. (Helga Esteb / Shutterstock.com)

They took the mollusk to a private beach in California on another trip to get him back to his natural environment, releasing him back into the wild. It must be quite an adjustment to the cold California water from its original tropical home.

Williams-Paisley gets to work on Nashville in Tennessee, where she lives, and shooting is taking her to many places she had never visited, even though she lives there.

“Some of the top places in a city, when you live there locally, you never get to see,” Kelly Ripa agreed. Is there somewhere in your town that you have never visited, even though you live close by?

Kimberly said she also loves her co-stars on the ABC series Nashville. This season, her character is having an affair, which has brought out the worst in fans who confront her on the street.

Bad girl is a new turn for Williams-Paisley, who said “she’s just motivated by love and she’s making desperate choices that aren’t the best for her” before finally admitting “it’s fun being a bad girl.”

Kelly said that bad girls get the best wardrobes. In a clip from the show, her character chats with Eric Close, who plays the mayor. The mayor is paying off Williams-Paisley’s character to keep her pregnancy a secret. She is excited about the child, but he does not want to get involved with the baby.

You can watch the drama unfold in new episodes of Nashville, airing Wednesday nights on ABC.