Multi-award winner Julianna Margulies came by to talk to Kelly Ripa and Michael Strahan. She had to hold her mic for some reason. Apparently there was nowhere to put it and she didn’t want to look like she had a humpback. Kelly loved her dress. Kelly congratulated her on her Emmy win.

She takes a bottle of wine in the car with her, but she clarified that her husband does it for award shows. It’s a long night for him and he’s just sitting there. He said that he thought it would make the ride more fun, and she agreed. It really takes the edge off. He keeps it in a hotel shoe bag with a towel around it and two champagne glasses. 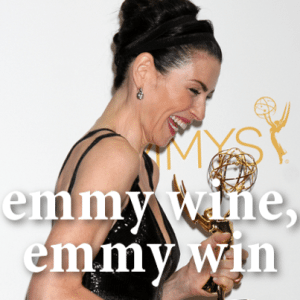 Julianna Margulies came by to talk to Kelly & Michael about the sixth season of ‘The Good Wife’ and her Emmys Tradition. (Helga Esteb / Shutterstock.com)

She got nervous this year though. It was on a Monday night at rush hour, and they couldn’t close down any of the streets. The Emmys are usually on a Sunday night, which makes it easier. They left at two, which is an hour earlier than normal.

Plus it was really hot because it was August rather than September. She didn’t drink because she was worried she’d have to go to the bathroom. But then they got there in 15 minutes because there was no traffic. So they circled around and pulled over and drank. It was really fun and it was a good outcome.

They then talked about the sixth season of The Good Wife. A lot has happened. There have been deaths, job changes, and scandals. Plus she’s been asked to run for office. Eli Gold wants her to run for State’s Attorney.

The first episode of the sixth season starts exactly where they left off. They had to refilm the exact same moment, which was weird after being away for two and a half months. She didn’t want to ruin anything, but did say that Alicia has a very difficult time deciding what the right thing to do would be. Margulies said that it’s such a current show and it’s such an exciting time in politics for women (hopefully) and it’s time women got involved. She got a lot of applause for that.

There are also a bunch of new characters and guest stars coming up. Margulies said that it’s really a testament to the writing. David Hyde Pierce, who stayed away from television since Frasier, just joined them.

Margulies doesn’t usually get too starstruck, but she did when Gloria Steinem was on the show. That’s incredible. I love her. She had to email her later and apologize because she was so star stuck. I really don’t blame her. Margulies thought she was just doing them a favor, but she really watches it and wanted to talk about what the show says about women. And then she started to talk about ER. That’s amazing.

They showed a clip of The Good Wife where she and another lawyer try to work things out and make a deal so they’ll have he biggest firm run by women. The Good Wife airs on Sundays on CBS.