Josh Hutcherson came by to talk to Kelly Ripa and Michael Strahan about his new movie The Hunger Games: Mockingjay Part 1, which I’m really excited for. People are obsessed with the Hunger Games movie. He had a good entrance. “That’s a good morning,” he said. 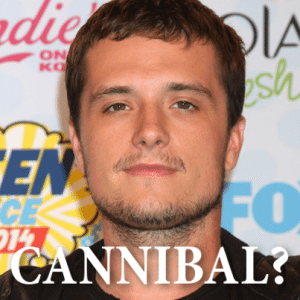 Josh Hutcherson came by to talk to Kelly & Michael about cannibalism and the new ‘Hunger Games’ movie. (Helga Esteb / Shutterstock.com)

He celebrated his 22nd birthday last month. He did a Halloween Horror Night at Universal Studios, which he’s done twice. They change Hollywood movies to make them scary and people jump out at you. Michael wouldn’t want to do that. A girl who works on the show, Andrea, just had a birthday and did something called Escape the Room.

Hutcherson rides a motorcycle in LA. It sounds terrifying. “It’s not safe,” he said. But there’s no traffic, you can park anywhere you want, and people can’t follow you as easily. It gives him more freedom.

Hutcherson did an interview and said he wants to try cannibalism. That’s so weird. I’m really grossed out. He said that if someone offered it to him because they were donating their body to science, he’d try it. Kelly’s chewed on his cuticles, so she understands. He’s not actively pursuing it and isn’t going to murder anyone, but he’d still try it if the opportunity arose. I’m sorry. I can’t get on board with that.

In the clip of Mockingjay, Katniss watches Peta say that the revolution should stop. Nobody will survive this, and they’re coming. “Would you eat Katniss?” Kelly asked. You can’t eat what you’re in love with. “That’s where I draw the moral line,” he said. Last time we saw Katniss, she was rescued. Peta was thought to be dead, but he was captured and tortured.

He hates being blonde for the movie. It’s a lot of work. He didn’t even know what conditioner was until he turned blonde and had to use it; otherwise, your hair turns to hay and becomes brittle. He’s happy he doesn’t have to do that anymore.

They finished the third and fourth movies. It was 10 months of filming. He was feeling all of the emotions. They became a family in the movies, so you miss it. But it’s also exciting that you finally finished what you set out to do. The Hunger Games: Mockingjay Part 1 opens on Michael’s birthday November 21 2014.