Jordana Brewster: Acting Debut On All My Children

Kelly & Michael welcomed Dallas star Jordana Brewster for a discussion on the show’s current second season, but Kelly was more preoccupied with Jordana’s pastel pumps. “Are those Casadei?” she asked, while Jordana asked Kelly, “are those Charlotte Olympia?” Guess what? They were both right!

However, shoe fetishes aren’t the only thing Jordana and Kelly have in common. Both women began their acting careers on All My Children. Jordana actually played Mark Conseulos’ sister when she was just 15. 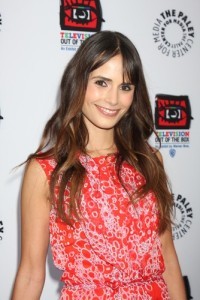 Later, Jordana moved onto As the World Turns, until booking her first feature film, The Faculty. Jordana said that working on soap operas is really great training for young actors, because she would receive about 10 pages of dialogue each day. By comparison, she receives about two pages on Dallas.

Like Eva Longoria, Jordana really values higher education. She took some time off from acting in order to receive her degree from Yale University. Jordana was an English major, and she’d really love to go back to school one day. She referred to herself as “a nerd at heart.”

Michael revealed that Jordana will soon reprise her role in the next installment of the Fast and Furious film series, Fast & Furious 6. Jordana said that she’s been making these action-packed blockbusters for so long that all the actors feel like one big family.

Prior to filming her first Fast & Furious movie, Jordana didn’t have her driver’s license. She’s a New Yorker, so she had never driven a car. Now she has her license, but most of the driving in the films is fake driving, anyway.

Jordana stars as Elena Ramos on the hit TNT reboot of Dallas, which is currently in its second season.

“There’s so much going on, and I can say nothing,” Jordana admitted.

The Dallas producers warned her about revealing any plot details, so Jordana was completely mum! Since she couldn’t say anything at all, Kelly and Michael were forced to move on to a clip from an upcoming episode of Dallas. In the preview, Jordana and co-star Jesse Metcalfe discuss a controversial new business deal. Dallas airs Monday nights on TNT at 9 p.m.