The hilarious Jimmy Fallon joined Kelly & Michael to promote his new sitcom on NBC, Guys with Kids, which Jimmy executive produced. The show centers around three thirty-something male friends who are all raising babies. Guys with Kids airs Wednesday nights at 8:30 p.m. on NBC.

Jimmy was a featured player on Saturday Night Live for six years, and he recently won an Emmy award for his return to the show as host. Jimmy hosted the Christmas episode, which also featured Michael Buble. But which is harder: starring in the show every week, or hosting? 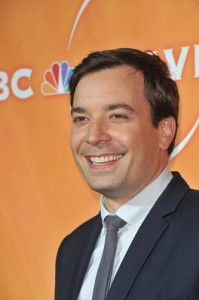 Jimmy said that for him, hosting is much harder. Since he was a featured player and knows the show so well, he worries about things that other hosts don’t. He also wanted to really nail his opening monologue, which is something the featured players don’t have to do.

Jimmy recently turned thirty-eight on September 19, so Kelly & Michael wished him a happy belated birthday. Another big celebrity that wished Jimmy a happy birthday was First Lady Michelle Obama, who tweeted him on his special day. Jimmy was super excited; but, he and the First Lady have been pals since he appeared with her at the White House for a ‘Get Fit’ challenge. She won, but Jimmy claimed it was just because “she had home court advantage.”

Jimmy and his wife, Nancy, have a new addition to their family: a little Golden Retriever puppy named Gary (who is a girl). Jimmy adopted her when she appeared on a sketch on Late Night with Jimmy Fallon, and he’s been in love with her ever since. He even brought Gary out to meet Kelly & Michael; she’s such a sweet little pup!

When Kelly Ripa appeared on Late Night with Jimmy Fallon, she played a game called “Rock, Paper, Scissors, Pie in the Face.” And, as the title suggests, things got a little messy. To exact her revenge, Kelly planned a game called “Rock, Paper, Scissors, Mystery Bucket,” which she played with Jimmy. First, they played rock, paper, scissors. Whoever the loser was had to stand underneath a mystery bucket, which could have something nice, or something not-so-nice, found inside.

Kelly lost the first round, but when she stood under her bucket, she only got fake money dumped on her head. Jimmy, on the other hand, was not so lucky. He lost four rounds in a row and had mystery liquids, goos, what he referred to as “whale sperm” poured right on top of him. To top it all off, he was also covered in feathers. Revenge is sweet!