Actor Jesse Metcalfe was welcomed by the famous Dallas theme song, which gets any Dallas fan immediately excited (Kelly and Michael especially). Jesse and his show had a lot of fans in the Live! audience.

Jesse and Michael know each other from Madden Football, but Jesse never pictured himself as a real football player. “I was never that disillusioned,” he said. Michael pointed out that guys as good looking as Jesse are almost always the quarterbacks. However, he probably makes a much better actor than athlete. 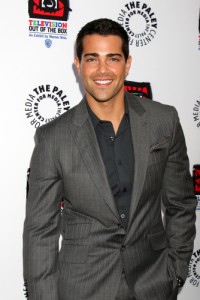 Jesse also admitted that he left his belt at home, so he borrowed one of Michael’s in order to keep his pants up. Unfortunately, he had to make a hole so that it would fit him. Hopefully Michael doesn’t mind!

Larry Hagman’s character, J.R. Ewing, was just recently murdered on the second season of Dallas. Once again, there’s a giant mystery surrounding who actually did it. It’s “Who Shot J.R.?” part two!

J.R. was killed off the show because Larry Hagman, the legendary TV actor who portrayed him, passed away in the fall of 2012. Jesse only knew Larry for a brief period of time, but he feels honored to have worked with him.

“He was a television legend, and he was the heart and soul of our show,” Jesse said. Larry was also a great practical joker, so the set just isn’t the same without him. However, Jesse believes that the best way to remember Larry is to continue to make a great show in his honor.