Jeff Perry stars as Cyrus, the White House chief of staff, on the steamy soap Scandal, and he visited Kelly and Michael to talk about the dramatic conclusion of season three, which is looming.

Michael Strahan said he has a love/hate relationship with Perry’s character, and he gave all the credit to creator Shonda Rhimes (also of Grey’s Anatomy). “She turns the moral universe topsy turvy,” she said. Perry said he thinks that fans should not be so mad at the character David. 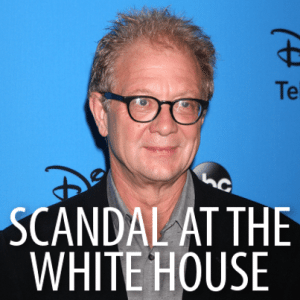 Jeff Perry stars as White House chief of staff Cyrus on the ABC soap Scandal, and he spoke with Kelly & Michael about presidential reactions to the show. (Helga Esteb / Shutterstock.com)

Kelly Ripa was surprised to learn that Perry and Michael Gelman attended the same high school in Highland Park, Illinois. Perry was classmates with actor Gary Sinise as well. He shared a photo of them backstage during a production of Tartuffe.

Perry credited Barbara Patterson, his drama teacher, with pulling him and Sinise out of “academic mediocrity” by getting them involved in drama. That’s the power of teachers, and Perry said that he is still in touch with that influential educator.

“She just inspired the heck out of us with an array of stuff, everything from Shakespeare to contemporary playwrights,” Perry said.

Perry was among the students who lobbied the school to turn half of the cafeteria into a theater, and that was the roots of the Steppenwolf Theatre Company. Kelly Ripa said she thinks it’s interesting that actors are so often terrible at math but good at English.

What does the White House think about Scandal? President Barack Obama reportedly told Shonda Rhimes that he wishes the West Wing was as exciting in real life as it is on TV. Kelly Ripa said that it must be wild to think that the president watches their show.

Kerry Washington told Perry that former president Bill Clinton saw her on an airplane and asked for spoilers. Perry will be attending the White House Correspondents Dinner in May 2014, and he hopes to get a tour.

During a previous visit, he stole napkins from the West Wing and later framed them. Kelly agreed that you have to get a souvenir. The hosts hooked Jeff Perry up with a Kelly & Michael cap and mug in case he gets the chance to take a selfie with the president or the First Lady.

Perry said that this is his juiciest role of all time, because he has so many shades. In a scene from an upcoming episode of Scandal, Cyrus gives the president some advice about why it’s important for him to win re-election. The final episodes of this season air Thursdays on ABC.