When Bryan Cranston last appeared on Live, he discussed working with Hayden Panettiere’s mom, Leslie Vogel, on the soap opera Loving. Later, he also worked with Hayden on Malcolm in the Middle, when she guest starred as a young nerdy girl. 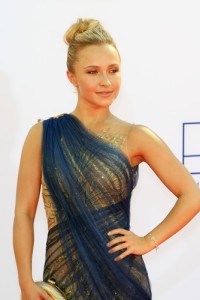 Kelly and Michael had a shocking picture of Hayden as “the nerd,” with wildly frizzy hair. Hayden found it a little embarrassing, but Kelly reminded her that Bryan originally thought she was way too pretty for the part. Even more embarrassing was the cheesy picture of Hayden’s mom and Bryan as a bride and groom on Loving.

Hayden is a big Jets fan, which is fitting, because her boyfriend is the Jets’ Scotty McKnight. Hayden even brought him along to the show. “Can a Jet and a Giant be in the same building?” Kelly asked. Michael promised that there’s no hatred between the Giants and the Jets, other than wanting to beat each other all the time!

Hayden is now starring in Nashville, which means that she’s living on location in Tennessee. She loves living in Nashville and being a part of the music culture. According to Hayden, Nashville is filled with nothing but talented people–it must be something in the water!

At home in Nashville, Hayden and Scotty own two pet snakes. This news did not make Michael happy! Even worse was when Hayden pranked him by throwing a fake snake at him. I didn’t think it was possible, but Michael ran away like a little baby! Check out Hayden’s hilarious prank below.

Hayden’s character on Nashville, Juliette Barnes, is a popular yet controversial young country star. Hayden loves playing her, because she’s so “feisty and fun.” Hayden loves that the show is such a real depiction of the music industry.

On the show, Hayden does all of her own singing, and Kelly complimented Hayden on her “gorgeous” voice. Hayden even got to sing at the Grand Ole Oprey, a legendary music venue. After she got over her terrible stage fright, she found it to be a great experience.

You can see Hayden as the fiery Juliette Barnes on Nashville, which airs Wednesday nights on ABC.