Kelly & Michael welcomed Goran Visnjic, the film and television actor who just may be taller than Michael Strahan (he and Michael stood back-to-back, and it was too close to tell)!

Goran’s most recognizable role to date is as Dr. Luka Kovac on the hit medical series ER. He said that people actually think he’s a doctor, and he’s even been asked medical advice by fans. While Goran remembers a few terms and procedures, he said actually performing them would be “too scary.” 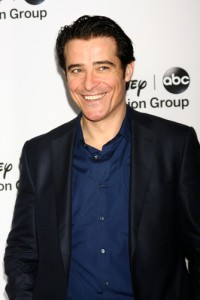 Recently, Goran starred on the big screen in both The Girl with the Dragon Tattoo and Beginners. In Beginners, he played Christopher Plummer’s boyfriend, which is a character he never imagined he’d ever have the chance to play. However, he said it was “really, really a pleasure to work with Christopher.” Christopher Plummer won an Academy Award for his role in the emotional film.

Goran’s latest role is as a powerful crime boss in the new ABC series Red Widow. The show follows the story of a California housewife whose husband is brutally murdered. She then becomes involved in organized crime in order to protect herself and her family. Goran was able to invent an interesting backstory for his character with show creator Melissa Rosenberg. He’s having fun shooting guns, flying planes and trying other exciting things he’s never done before.

Kelly and Michael checked out a very intimidating clip of Goran with co-star Radha Mitchell, who plays Martha. To see more of Goran Visnjic in Red Widow, tune in Sunday nights on ABC.