It’s been less than a year since the Desperate Housewives finale aired, but Eva said that people are already pressuring her to get back to work. Last summer she was busy campaigning for President Barack Obama, and after that she spent a lot of time traveling. 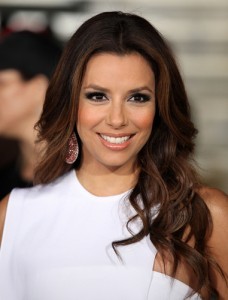 Eva Longoria discussed her new role behind the camera as executive producer of Ready For Love with Kelly & Michael. (DFree / Shutterstock.com)

The thing Eva misses most about Desperate Housewives is the show’s crew. She misses seeing the same people every day. This year was her first birthday that she celebrated off set without a cake from the crew. Luckily, her mom made her a cake, but it just wasn’t the same!

What Eva doesn’t miss about Desperate Housewives is the “grueling and grinding” schedule. Now, she’s had more time to devote to her education. Did you know that Eva has been taking night classes for her Masters? She loves school and is finally finishing her thesis on Latina Education. It’s Eva’s plan to dedicate her life to making sure that young women receive an education.

In the meantime, though, Eva will be working on Ready for Love. The show features 36 girls, three men and three matchmakers, in a modernized format of the traditional dating show. Eva was responsible for hand-picking all the men and women, and she promised that she found three amazing guys.

For those who are single, Eva said that the show offers great advice. During a clip, the women were advised to stop making self-deprecating remarks in front of the guys. ”Girls, are you hearing this?” Kelly said.