Live! With Kelly & Michael continued with its “Kick Start the New Year: Nutrition Edition” with a visit from Dr. David Perlmutter. Dr. Perlmutter talked to Kelly Ripa and Anderson Cooper about some foods that could be the brain’s “silent killers,” which sounded very ominous to me. I’ve really been enjoying these “Kick Start the New Year” segments, though, and I was excited to see what they came up with next. So far, they’ve all been really informative and helpful. They’ve given me some good ideas about how I can be healthier. And Dr. Perlmutter’s segment definitely seemed like it would at least be interesting. 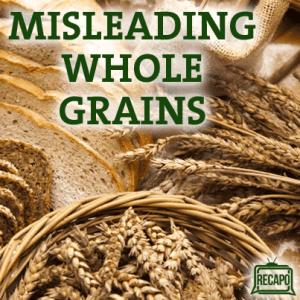 Dr. Perlmutter, a neurologist, was talking about his book The Grain Brain, which talks about wheat, carbs, and sugar, which are some of Kelly’s favorite things. They’re silent killers. Even beyond the gluten issue, you could still get in trouble with carbs. They’re devastating for your health.

It’s bad for your heart, brain, and immune system. And it can give you diabetes. He chose the name because it rhymes. Grains have gluten, which causes inflammation, which could cause Alzheimer’s Disease and other things. You need to go gluten-free even if you don’t have an intolerance. Whole grains aren’t always good. It’s pounding your body with carbohydrates. Anderson looked at the table and said that it looked like his dinner.

You can’t eat peanuts. They’re not actually nuts. Most of them are genetically modified and have been sprayed with weed killer. Orange juice also has way too much sugar. A glass has nine teaspoons. The food companies must hate him, but you need to create nutrition to boost your brain. If you eat this way, it’s bad for your body.

Kelly & Michael: What Can You Eat? Grain Brain

So what can you eat? You want to have deep, colorful, nutrient-rich vegetables. Acocados have fat, which is good. Olive oil is also good. You can have organic cheese. You can also have eggs. It’s nature’s perfect food. Coconuts and coconut oil are great. It helps patients with dementia. Meat is also great, but make sure it’s grass-fed or eat fish. I found all of this really helpful, but probably hard to stick to.