Dolly Parton isn’t just a country legend and best-selling singer, actress and author, she’s also the “best-smelling” celebrity in the world! Kelly told Dolly that she always smells amazing and Michael was happy to meet the entertainment icon for the very first time. First up, the hosts and Dolly chatted about the upcoming holidays.

As you can imagine, Dolly loves the holidays because she’s a very extravagant person all year! She has a very large family and loves decorating her home. She usually puts up a two or three Christmas trees. Her nieces and nephews receive money for Christmas and her friends usually receive gift baskets from Dollywood, her theme park (because she can get those pretty cheap). 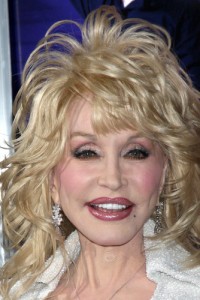 But what does Dolly herself like to receive? What do you get the woman who has everything? Dolly says “you get her something to carry it all in!” She likes to receive luggage, bags and also likes costume jewelry.

Dolly is celebrating the release of a new book entitled Dream More: Celebrate the Dreamer in You. She was inspired to write the book after she gave a commencement speech at the University of Tennessee in Knoxville, where she discussed the things that had made her successful. She also has a literacy program called the Imagination Library, which holds the motto “dream more, learn more, care more, be more.” All of the proceeds from her book are going to the organization.

Since Dolly is now a Doctor, Michael asked if she’d like to be called “Double D” for “Doctor Dolly.” Everyone laughed, and Dolly replied, “I’ve been called that for years!”

Dolly Parton: Dream More: Celebrate the Dreamer in You

Dolly said that her book “won’t change the world,” but there will be some great advice based on experiences from her own life. Kelly reminded everyone that Dolly came from very humble beginnings; she is one of twelve children from a very poor, rural family. Dolly elaborated that her father was illiterate his entire life, so she dedicated her book to him. Dolly’s story is a true rags-to-riches tale of success, and one that you just don’t hear anymore. She’s a true example of the American Dream.

Before they let Dolly go, Kelly and Michael played a game called “Dishing with Dolly.” Dolly proved that she is just as smart and witty as ever. When Kelly asked her, “What’s your favorite color?” Dolly replied, “Clairol number 249.” The last question was, “Are they real?” and Dolly managed to dodge that one by holding up her fingers and quipping, “Do you really think I could grow my nails this long?”