Demi Lovato’s star is on the rise. At age 20, the Disney star has a #1 hit single, “Give Your Heart A Break,” and a new gig on the Fox reality series The X Factor. She hung out with Kelly and Michael to talk about her bipolar intervention and recent successes.

The recently revamped Live! studio puts the audience closer than ever to the action, and Demi took advantage of this to work the front row of the audience with handshakes and smiles. Then she admitted to Kelly that she has changed her hair color six times so far this year. 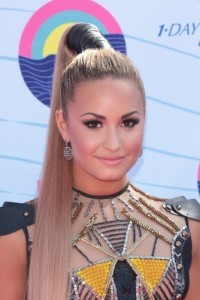 Kelly & Michael learned about the Demi Lovato bipolar intervention that saved her life, and her friendly feud with Simon Cowell on The X Factor. (s_bukley / Shutterstock.com)

“The fact that you still have hair left is amazing,” Kelly said. But Demi gave all the credit to her hair salon. She may be young, but she knows to give credit where it’s due.

Demi had never met Michael before this interview, but she remembered him from Chunky Soup commercials. She is partial to the Dallas Cowboys, but she looked up the fact that Michael’s New York Giants won the Super Bowl a few years back. Way to Wikipedia things, Demi!

Young Demi recently observed her 20th birthday at “a giant trampoline warehouse,” which Michael said his children loved. She said she enjoyed the innocent fun, despite the fact that she’s feeling older. I’m sure it’s hard to be a teen when you are a pop star with TV obligations.

Demi Lovato will be performing her hit, “Give Your Heart A Break,” at the MTV Video Music Awards pre-show September 6 2012. Kelly noted that she had auburn hair in the video, but Demi said her current shade of blonde is her favorite, at least for now.

She also talked about her dozen tattoos, which she said are in some obscure places, such as between her fingers. She has a friend’s lip kiss on her wrist and several others. She has thought about maybe having them removed in a few years, but she wants to enjoy them for now.

A few years ago, Demi was traveling internationally and “ended up hurting one of my friends. I was just going through something that was so dark, and I was very, very mentally sick,” she said.

She said that she left her tour and came home to an intervention from her parents. She agreed to accept help and was eventually diagnosed with bipolar disorder.

“It was just so awesome…to be able to pinpoint a diagnosis for the reasons why I was extremely, amazingly happy, and in a euphoric state, and then the next month, I was in this deep depression. And I had everything great in my life. I had nothing to complain about, but I wasn’t happy,” she said.

This fall, Demi is joining Britney Spears and Simon Cowell as a judge on season 2 of The X Factor. She called Britney amazing, adding that Simon is fun to work with, but she doesn’t take any of his crap.

“I definitely give it back to him. I don’t put up with it,” Demi said of Simon’s strong opinions. “If you’re going to dish it, you might as well be able to take it.”

In a clip from the upcoming season, Simon and Demi swapped insults in front of a contestants. Season 2 of The X Factor premieres September 12 2012 on Fox.

A video highlight package of Kelly and Michael showed the new co-hosts moving and grooving together in a series of previous moments from their time together on the show. Kelly said it’s funny to watch these clips with Michael, who asked, “When did all this happen?”