For four seasons, Christine Baranski has portrayed a powerful partner on the CBS drama The Good Wife. She opened up about her love of the Buffalo Bills, Hillary Clinton, and her accomplished family. 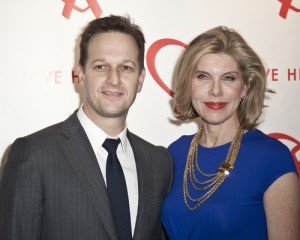 Kelly and Michael talked with The Good Wife star Christine Baranski about her love of the Buffalo Bills, her family’s achievements, and Hillary Clinton. (lev radin / Shutterstock.com)

Kelly said the Live! team has been complaining about New York’s cold weather. But Christine is from Buffalo, New York, so she thinks “this is nothing.” She recalled going to school as snowbanks were taller than students.

She said she is a Buffalo Bills fan, and she said she has a T-shirt saying: ‘Buffalo: a drinking town with a football problem.’ “You live in Buffalo, you’re used to cold weather and having your heart broken,” she said.

Christine admitted that she has lived in Connecticut for years, so she has tried cheering for a winning team, like the Patriots. However, they ended up not making it to the Super Bowl this year. She is pulling for the Baltimore Ravens in the big game this year.

Her Good Wife co-star, Josh Charles, is a Baltimore native and huge Ravens fan, so she said they are always talking football on the set. She did volunteer to sing the National Anthem if the Bills ever wind up in a Super Bowl.

As for Beyonce’s lip syncing, Christine believed it would be just as much pressure to match your recorded voice. “You want to put in a perfect performance. It’s a moment in history,” she said. “I thought she rocked it. I thought she was fabulous.”

The co-hosts invited Christine Baranski to play a rapid fire round of Q&A, this time called “Christine’s Court.” She plays lawyer Diane on The Good Wife. What are her real life rulings?

She said she would never wear fuschia, gets annoyed by slow walkers in New York, and does not tip if the service is absolutely horrible. Christine would love to go to dinner with Michael Strahan.

She prefers spontaneity to organization, cannot be friends with someone who doesn’t like her spouse, and would prefer a friend who doesn’t reveal personal details to one who over-shares.

Though Christine plays a lawyer on TV, her daughter is a third year law student. She said she calls her daughter for definitions of legal terms in the scripts. She said she and her husband Matthew have been married 29 years and raised some great kids.

Her husband, Matthew Cowles, played soap opera villain Billy Clyde Tuggle on All My Children. In a clip from The Good Wife, Christine’s character debates with co-star Josh Charles about a strategy in a big confrontation for the law firm.

Kelly Ripa said she actually believes Christine Baranski is a lawyer. She does play one on TV, and you can see her in The Good Wife, Sunday nights on CBS.