Bret Michaels was on the show June 17 2013 and Kelly Ripa was having a hard time believing he was 50. He said it really happened and he was just happy to be “living on the right side of the dirt.”

For his 50th birthday celebration, Michaels said he spent it with his kids. He had a kids birthday party with his two children and then the next day he had a “super mega party” on his bus with only adults. He said everyone had a great time, they listened to some good music and they drank a lot of good alcohol.

“I throw a good party. I am a great host,” said Bret Michaels. “We threw a great party the way a party is supposed to happen.” 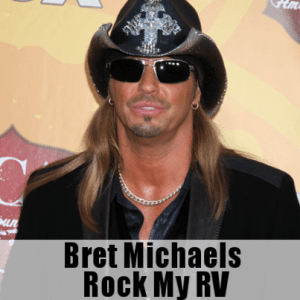 Kelly Ripa and Michael Strahan talked with Bret Michaels about his recent 50th birthday party and about his new show, Rock My RV.
(Helga Esteb / Shutterstock.com)

There are few people in this world more positive than Bret Michaels. Even with his type 1 diabetes and the brain hemorrhaging he suffered a little while back, Michaels is still optimistic about the future. He tries to stay as positive as he can even though he said being a rock star and having diabetes is a “tremendous inconvenience.”

Kelly Ripa pointed out a lot of people are rocking headbands now and it seems like everywhere she turns someone is trying to look like Bret Michaels.

“I am probably not the first person to wear a bandana,” said Bret Michaels asa a girl yelled out he was the cutest though.

Bret Michaels is the host of the new Travel Channel show, Rock My RV, a show that follows Michaels around the country as he fixes up RVs for a number of people. From business men with great ideas for the future to families who are down on their luck, Michaels help everyone.

It may seem that a musician is fixing up RVs, but Michaels said RVs are close to his heart. His entire childhood was spent camping with his family, driving state to state in the family RV. He said his family loved the open road and it is something that he has continued to love as he has grown older. He also said he is an in RV nine months out of the year so he knows what needs to be an RV and what doesn’t.

“I am one of the first musicians to take an RV to Europe and Australia,” said Michaels, explaining other musicians stay in hotels but he wanted to see the open road of those countries as well.

Kelly Ripa seemed a bit jealous of Michaels’ lifestyle saying it has been her dream to travel across the country in an RV since she was a little girl.

You can see more of Bret Michaels when Rock My RV airs Sunday nights on the Travel Channel.