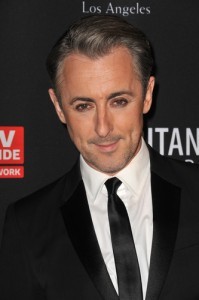 The last time Alan appeared on Live, he discussed his powerful new movie Any Day Now. If you haven’t had the chance to see it, Any Day Now will soon be on DVD. Peter Facinelli recently saw the film and was very moved by Alan’s performance.

Alan loves chatting about his beloved dogs, Leon and Honey, who are celebrities in their own right. Alan shared pictures of the dogs riding a New York City taxi, and also detailed a story about Leon (the chihuahua) eating his dinner, as well as Honey’s. When Alan came home, Leon’s stomach looked like a “melon.”

Alan knew that his good friend Liza Minelli was in the audience the other night, because she clapped and shouted for him during a death scene. Alan and Liza have known each other for 15 years, ever since she came to see him perform in Cabaret. They’ve been great friends ever since.