Abigail Breslin: Nominated For An Oscar At 10-Years-Old

You may be surprised to learn that actress Abigail Breslin is almost 17, which she admitted that most people are “shocked” to realize. Abigail met Michael for the very first time during her interview on Live!, but her first appearance on the show was back in 2007 at 11-years-old.

Most people remember Abigail from her Academy Award nominated performance in Little Miss Sunshine. She was just 10-years-old at the time. When Kelly asked Abigail what she remembers from Oscar night, Abigail admitted that “it’s all kind of a blur now.” However, she does remember stashing homemade chocolate chip cookies in her clutch so that she had something to snack on during the show. 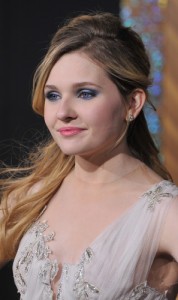 Actress Abigail Breslin discussed filming scenes in a trunk for the new film The Call with Kelly & Michael. (Featureflash / Shutterstock.com)

Now, Abigail watches the Oscars at home with her dogs. It must be pretty amazing to have that memory, though.

Abigail recently had the chance to work with Meryl Streep in the film August: Osage County, which she explained was “like being at acting school for three months.” Understandably, Abigail was so nervous to work with the screen legend, even though she only had one line.

Everything was going fine until Abigail had to work with props, and she began dropping things. She thought to herself, “I’m wasting Meryl Streep’s time right now!” In the end, however, the overall experience was “amazing.”

After checking out a heart-pounding clip of The Call, Kelly could barely speak! In the new movie, Abigail plays a teenage girl kidnapped by a brutal killer and locked in a trunk. As a result, most of Abigail’s scenes were filmed inside of several different car trunks. When asked what that was like, Abigail admitted, “it was not ideal in terms of comfort.”

While filming in the trunks, Abigail was connected via ear piece to co-star Halle Berry, who plays the 911 operator that answers her emergency call. Overall, Abigail spent about four days in different trunks.  “They let me out!” she assured when the audience let out an audible gasp.

See Abigail Breslin in The Call, which opens in theaters Friday, March 15 2013.