You know Kurt Warner from his days in the NFL. These days, he is helping to change lives on a new USA reality series, The Moment, which he talked about with Kelly and Michael.

Kurt said he can’t believe that he used to be intimidated by Michael Strahan when he faced off against the New York Giants. “When you put on meggings, you will never be feared again,” Warner said. 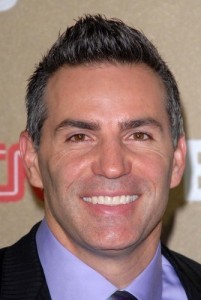 From the new USA reality series The Moment, Kurt Warner talked about his opportunity to change people’s lives by giving them a shot at their dreams. (s_bukley / Shutterstock.com)

For his part, “only a quarterback could pull off yellow pants,” Strahan said of Warner’s attire.

Warner and Strahan also faced off in a fan vote over the Madden 25 cover. Strahan beat out Warner, but he was ultimately beat out by Jerry Rice. It sounds like Rice may have trouble getting booked on the show anytime soon.

Michael said that Kurt Warner is a great man with a remarkable story. After college, he wound up stocking shelves instead of fulfilling his dream in the NFL. He was cut from the Green Bay Packers after four years on the bench in college.

Eventually, he found his way to Amsterdam, playing arena football before being picked up by the St. Louis Rams, where he was a third-string quarterback. He admitted that there were no guarantees, but fortunately everything worked out well for him.

Now he is paying it forward by giving other people a second chance in the new series The Moment. Warner explained that he was excited by the concept of the show, which follows up with people whose dreams were put on hold due to life circumstances.

“Sometimes life throws you a curveball. It takes you in a direction that you never saw it going,” he said. As host, Warner has the opportunity to give people a new chance to pick up their dreams and try again.

At the end of their training on each episode, the subjects of The Moment have a chance to get that interview or audition that could change everything.

In a clip from the series, Warner talked with a contestant who was struggling with the hard reality of working toward what she wanted in life.

Strahan asked Warner who would play him in a movie. He said that was up to his wife, as long as he can pick the actress who plays his wife. One name that has come up is Ben Affleck, but Strahan liked the idea of Ryan Reynolds. Warner’s wife wanted Denzel Washington for the role.

In The Blind Side, Warner said that his seven children though that Sandra Bullock’s character reminded the family of his wife, Brenda.

Warner helped make Kelly Ripa’s Dancing With The Stars dream come true by dancing the Viennese Waltz with her.