From the new US version of the Sherlock Holmes story, Elementary star Jonny Lee Miller joined the co-hosts for his first Live appearance. Did you know he runs marathons and has a well-known actor grandfather? 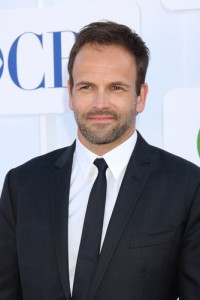 Jonny Lee Miller visited Kelly and Michael to talk about the episode of Elementary airing after the 2013 Super Bowl, and his best marathon times. (Helga Esteb / Shutterstock.com)

Back in November 2012, Jennifer Carpenter talked about training with Jonny Lee Miller for the New York Marathon. They both love running, so it was a shared passion that they discovered during their work together on Dexter.

The first year they ran together, she finished in 3:34. He said his best marathon time is 3:01. However, the 2012 New York Marathon was cancelled in the aftermath of Hurricane Sandy.

The co-hosts agreed that endurance and mental strength must both be keys to success. Jonny said it is a great way to clear your head and get away from anything that is on your mind.

Acting runs in Jonny’s family. His grandfather was M in a dozen Bond films years ago, and starred in 100+ British movies in the postwar film boom there.

Jonny plays Sherlock Holmes and Lucy Liu stars as Dr Watson in the CBS drama Elementary. His character entered rehab after a misstep in London and moves to New York City to restart her career.

Lucy’s Dr Watson also has a troubled past and is hired as a “sober companion” to Holmes as he restarts his career. “I really like the way the show deals with sobriety as well as mysteries and crime,” Jonny said.

Kelly said she loves the characters’ quirky relationship in Elementary. The series is airing in the hotly contested post-Super Bowl slot on CBS Sunday February 3 2013.

In a clip from the upcoming episode, Holmes suggested that Watson give up her own rent-controlled apartment, which she has been subletting while working as a live-in companion for Holmes.

See that episode Sunday after the big game, and watch episodes Thursday nights on CBS. I have never seen this or the BBC reboot Sherlock. Which one should I watch first?