The adorable Jayma Mays plays germaphobe guidance counselor Emma Pillsbury on Glee and she’s back in the sequel to The Smurfs this summer. Mays wasn’t afraid to high five the audience, like her character would have. She wore a flashy yellow blazer with a matching skirt. I wasn’t a fan of the blue top and long sleeves she paired with the look, but her red hair was waved to perfection. 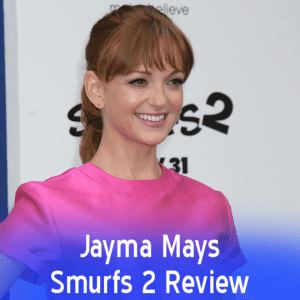 Jayma Mays said she’s proud of her new film, Smurfs 2, and spent most of the filming going to restaurants with Neil Patrick Harris, who documents his food on social media. Helga Esteb / Shutterstock.com

Mays has spent all summer visiting her family and her husband’s family. Her husband is from England, you may remember him from the Epic Movie and Date Movie in the lead male role.

The couple spent the summer traveling from family to family, but Mays got to spend a lot of time on location when she shot Smurfs 2. The shooting began in Montreal and then wrapped in Paris, France. She joked that she came back with a foie gras neck jowl.

Neil Patrick Harris is quite the foodie and he played Jayma’s husband in Smurfs. While in France, Jayma Mays tried to follow Harris around from restaurant to restaurant.

He has a Twitter account where he just visits restaurants and takes photos and reviews the food. Kelly Ripa said she gets nervous when he comes to dinner because she doesn’t know what to serve him. If Neil Patrick Harris tells you to visit a restaurant, you make reservations before he walks away from you.

Jayma Mays grew up in Grundy, Virginia, on a street called Lover’s Gap. It’s a small coal mining town in Appalachia. On the hill she lived on, Mays was the only girl. She had to make friends with the boys and play sports if she wanted to have friends. Mays ended up playing basketball and was pretty shocked by her old basketball photo.

Jayma Mays said she is very proud to be a part of the Smurfs family. She said it has a lot of love, heart, humor, and adventure, making it the perfect family film. The entire cast from the first film, including Katy Perry and Hank Azaria, are back for the sequel.

The Smurfs is now in theaters.