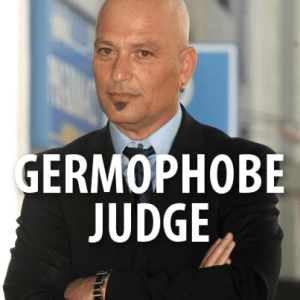 Howie Mandel came by to talk to Kelly & Michael about the season premiere of ‘America’s Got Talent’ and announced that he’s going to be a grandfather. (s_bukley / Shutterstock.com)

Howie Mandel came by to talk to Kelly & Michael. He’s “hilarious” and “always unpredictable.” He elbow high fived them. Kelly said that some people tried to shake his hand. You should never try to shake his hand, especially with the whole MERS thing. He was the first person Kelly thought of when she heard about it. He’s a huge germaphobe. He thought one of the people on his plane had MERS. Kelly wanted to know if he holds his breath when people sneeze. He’s more extreme than that. He can hold his breath for two and a half to three minutes. He said he’s like a deep sea diver!

Howie Mandel’s going to be a grandfather. His daughter Jackie is pregnant. Kelly wanted to say he’s so young, but he said he’s close to 60. He seems young because he’s immature, but he’s not. It’s a girl. He joked that they were still going to find out who the father is. Kelly said he could check if he’s really Jackie’s father too because he said he’s still not used to being a father, let alone a grandfather. Mandel wants the baby to call him “my favorite.” His wife wants to be called the teasing song “nanananana.”

They played a clip of America’s Got Talent. The contestants had their shirt off, so Mandel took his shirt off and started dancing along. Mandel said that the Travel Trivia dancer just saw his future. Mandel regrets it. He said those aren’t his nipples. They’re stunt nipples. Mel B. stuffed change down his pants. It didn’t stop there, though. He actually ran onto stage. They showed a clip. Kelly said he should have waxed his lower back. Mandel doesn’t wax. He shaves. He’s a fast swimmer because of it. Kelly was wondering about the contestants. They were called Rock Hard.

May 27 is the premiere of America’s Got Talent on NBC. It’s going to be fantastic. There is a variety of talent including the youngest and oldest talent they’ve ever had. Michael said if he’s taking his clothes off in the beginning, he can’t wait for the finale. Kelly said that they get better with each season. Mandel agrees. You’ll cry, laugh, and your jaw will drop to the floor. Michael said that Mandel was the best guest. He let him take it to commercial.