Cuba Gooding Jr is currently starring in a Broadway play, The Trip to Bountiful, but he has been living in New York City most of his life. He said that he enjoyed walking to work for the first few times, but then fans started swarming him on his daily commute. He now has to drive to work, as he explained on Live! with Kelly and Michael. Gooding said that he got his start in performing on stage, but this is the first time that he has been doing it professionally. 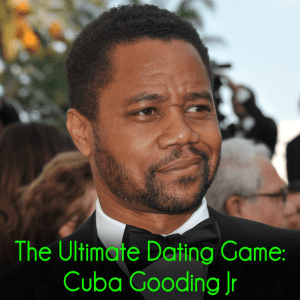 Cicely Tyson and Vanessa Williams have been taking Cuba Gooding Jr under their wings. He said starring with them in The Trip to Bountiful has taught him a lot, but it’s also taking a lot from him. His voice was pretty raspy today, most likely thanks to the double show days.

Gooding got his first movie break in Coming to America. His scene was actually cut from the film, so he was just a snippet in a barber shop scene. His scene was meant to continue and he would say he forgot his wallet at home, hoping for a free haircut. The barber, played by Eddie Murphy, took his hair and made a horribly jagged chop. He said that he could go home and get the wallet, and his hair would be wait for him. The scene was cut because there were so many funny moments and he was just a first time actor.

A clip from Gooding’s past revealed that he was a contestant on The Ultimate Dating Game. His hair was perfectly ’80s and he wore a zip-up turtleneck windbreaker. The clip showed him describing his perfect date a “Miss Personality,” because energetic and she has to be vivacious to keep up with him. Needless to say, it was hilarious and awkward.

The first time that Cuba Gooding Jr worked with Lee Daniels, director of The Butler, was in Shadow Boxer. He was in a family of hitmen and Helen Mirren played his mother figure/love interest. He was offered parts in Precious and other Lee Daniels projects, but turned them all down until finding The Butler.

“I think it’s the first time that the civil rights era has been captured in such an epic way,” said Cuba Gooding Jr. on Live! with Kelly & Michael.

From slavery to President Obama’s inauguration, Lee Daniels’ The Butler is reaching out to both white and black audiences, said Gooding. He read the script about seven years ago and ended up testing for Forest Whitaker’s title role. He was ultimately cast as the funny head butler, Carter Wilson. Gooding was happy with the decision because Whitaker and Oprah Winfrey have the best relationship.

The Butler is now in theaters! Have you seen it yet? Let us know what you think in the comments.