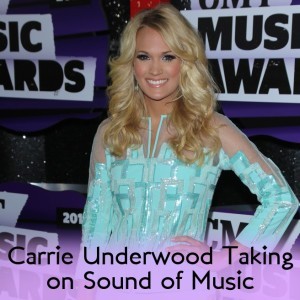 Carrie Underwood talked starring in The Sound of Music event on NBC and hosting the CMAs with Brad Paisley for the sixth time. (s_bukley / Shutterstock.com)

The adorable Carrie Underwood is America’s Sweetheart and an American Idol, and she was also a guest on Kelly & Michael. Her new CD/DVD Blown Away Tour Live! is now available. From hosting the CMAs to performing on Broadway to shopping for her own groceries, Underwood does it all and makes it look easy.

Carrie Underwood Takes On Maria in Sound of Music for NBC

Underwood recently took an anniversary vacation with her husband to Austria. They hadn’t vacationed since their honeymoon, but the trip held even more meaning. Underwood will be taking on the role of Maria in The Sound of Music for a live special television event on December 5 2013.

The trip took her to all of the places where the Von Trapps lived and where the film was made. She said that she’s definitely nervous to play the role, more nervous than having to move to New York.

Carrie said she’ll be living in New York for several months before the live show on December 5. She’s bringing her dogs with her, so she’s looking for an apartment with some grass. Plus a gym and a grocery store nearby. Underwood said she absolutely loves to grocery shop.

You can now get Carrie’s concert DVD and catch her hosting the CMAs with Brad Paisley for the sixth year in a row. The Sound of Music live television event will be three hours long, broadcast on NBC December 5 2013.