Actor, comedian, and star of How I Met Your Mother Neil Patrick Harris was today’s guest co-host on Live With Kelly. As he sat down with Kelly Ripa, Neil complimented her new studio space, which he called “modern” and “fancy.” Neil has guest co-hosted before, but just in the old, smaller studio. Kelly thanked him and said that she loves following him on Twitter. Neil’s is one of the most popular celebrity accounts (@ActuallyNPH), and he had one million followers just three minutes after signing up. Neil said that he enjoys Twitter because it gives celebrities a voice without having to go through a publicist. On Twitter, he said, you can just tell everyone, “I’m drunk!”

Neil is currently in New York because he is getting ready to host the Tony Awards this Sunday night, June 10 2012. Neil is a theatre buff and has hosted the awards once before, in 2009. Kelly asked him which shows he would recommend seeing this year, and Neil said that Once and Newsies are his two favorite shows.

He also not-so-subtly plugged a play that he was involved with called Sleep No More, which you can find more about at sleepnomorenyc.com. Neil made Kelly go see the immersive theatre show, but he claimed that she left after fifteen minutes. She corrected him, saying that she left with only fifteen minutes remaining, because she had an issue with the babysitter. 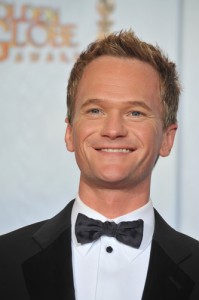 The last time that Neil co-hosted was for the Live With Kelly post-Oscar show, for which Kelly and Neil had a very theatrical entrance.

They were supposed to have Uggie, the dog from Best Picture winner The Artist, head up into the elevated seats with them, but his trainers thought it would be too dangerous. Kelly joked that it was not too dangerous, however, for two people who both have small children.

Yesterday on “Live,” Kelly chatted with Miss USA winner Olivia Culpo. Today, Neil read that Donald Trump is up in arms (to which he sarcastically said, “surprise”) about Miss Pennsylvania’s claims that the pageant was fixed. Neil joked that it is surprising to hear people being concerned that things are “fake” at a pageant, if you catch his drift.

Kelly was pleased to hear some news about one of her favorite headline makers, the “Tan Mom.” A newspaper published a picture of her from when she was young and an aspiring model. Kelly said she loves her because, “she’s from New Jersey, that’s my peeps!”

Live With Kelly: Snow White and the Huntsman Controversy

Neil brought some adorable pictures of his kids to show the Live With Kelly audience. He and his partner, David Burtka, have adorable one-and-a-half-year-old twins, Gideon and Harper. Kelly said that she has a “Gideon and Harper” calendar in her home, that David and Neil made by dressing the kids up in cute theme outfits for every month. Neil is a very proud dad!

During Spring Into Spring Trivia, a viewer proved to be a How I Met Your Mother fan when she called Neil “legen– wait for it– dary,” the catchphrase of his character, Barney, from the show. She won a trip to St. Lucia by remembering that yesterday’s guest, Jenny McCarthy, is dating a player for the Chicago Bears. A lucky audience member also won a gift certificate to beauty.com.