On today’s show, Mike Greenberg joined Kelly for the second time in a row as co-host on Live With Kelly. Mike is one half of the ‘Mike’ duo that host Mike and Mike in the Morning on ESPN (the other is Mike Golic). This morning, Mike revealed that he has a minor complaint about his duty as guest co-host.

The first two times he did it, there were beautiful women on the show (Olivia Wilde and Kristen Stewart). This time, the table were turned, because there was a guest that made his wife swoon. Mike said that he is not comfortable with the “oh” sound that his wife made when she found out that Chris Hemsworth would be on the show. Kelly joked, “I think we all know what that ‘oh’ stands for!”

Kelly made note of the fact that tomorrow is her oldest son’s birthday, and he turns fifteen years old. However, as Live With Kelly viewers will know well, she must refer to him as “He-Who-Must-Not-Be-Named,” because he gets so embarrassed about being discussed on the show. Mike said that his oldest child is eleven, so he understands; when his kids were little and he dropped them off at school, they would cry for him. Now, they give him dirty looks. 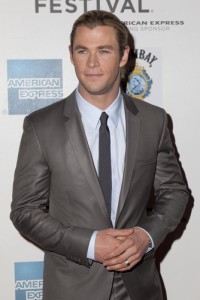 Mike brought up a new idea that some restaurants have recently thought up: iPad screens inside the table in order to occupy children.

Kelly said that she does not allow iPads at the table, because she wants her children to be patient and to engage with the family. She will, however, sometimes let them play Brick-breaker on her iPhone if they are really acting up. Mike said that, at eleven and nine, he wants his kids to totally disengage from the family.

Mike and Kelly then watched an adorable video of a two-year-old cowboy riding his miniature horse, and Mike loved his cowboy hat. Mike revealed that he would have liked to live in a time when men wore hats. Kelly’s youngest child, Joaquin, does wear hats like fedoras and newsboy caps, as well as bow ties. She called him “a weird kid.”

Mike Greenberg has made his career as a sportscaster, however unlike many sportscasters, he was never a professional athlete. He brought up a news article that described how nerds (like he was) can be recruited, just like a pro athlete. Tech firms are now scouring the country’s colleges looking to wine and dine genius kids, just like sports teams do to talented players. Mike suggested this path for Joaquin.

They then listed the ten most annoying restaurant habits. They included:

Mike asked the question that is probably on all men’s minds: why is the line for the women’s room always so long? Kelly explained that there is a more of a process for women, including more clothes to remove, lining the seat with toilet paper, and sometimes cleaning up after the person who came before you. Mike reminded Kelly that she called him a snob yesterday for switching out his toilet seat– but that sounds a lot easier.

During Spring into Spring trivia, a caller from Arizona won a trip to Park City, Utah, after answering that Martin Short had just come back from the Cannes Film Festival. Plus, an audience member won a $500 Fandango gift card.

Live With Kelly: “Grilling with the Stars”

Mike and Kelly had a quick chat with Joey Lawrence, who was waiting outside and prepping his fish tacos for his grilling segment. Kelly described the Live “Grilling with the Stars” competition, in which celebrities will grill up some of their favorite recipes for a chance to win $25,000 for charity.