Actor, comedian, and writer Martin Short, a frequent Live With Kelly guest co-host, joined Kelly once again for today’s show. Kelly revealed that the last time they saw each other, they were both at the White House Correspondents Dinner. They were “goosing” at each other, until Mark Conseulos interrupted, that is.

It was Martin’s first time at the event, and Kelly asked him if he enjoyed himself. He said that being in front of the President, Vice President, First Lady, and 3,000 people is quite intimidating, but very exciting at the same time. Martin did admit that he committed several faux pas, though.

The first of many was that he accidentally grabbed David Axelrod, thinking that it was a friend of his, Richard Klein. From behind, he called him fat before realizing who it was. Kelly’s big faux pas was that she took more than her fair share of party favors. 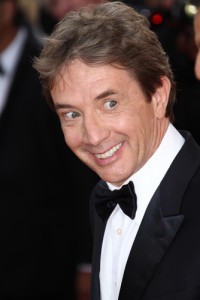 The last time Martin co-hosted was in March at the old studio, so he complimented Kelly’s fancy new studio. They then discussed Kelly’s big girls’ night out. She and her friends went to a restaurant called Perla, which is apparently for adventurous eaters (something that Kelly and her friends are not).

They did end up enjoying the pasta that they ordered, but the meal’s main attraction were the cocktails. They each had three of the vodka cocktails that the waiter recommended, which meant that it rained and stormed outside, but none of them noticed a thing.

Martin suggested that for drinking cocktails, the best thing to do is drink a glass of water to match each alcoholic drink you consume. Kelly said that they decided to forego water as well.

Over the weekend, Martin’s youngest son, Henry, graduated from Notre Dame University. All three of his children went to Ivy League schools, so he professed that he was glad to be making his last college payments. Martin described his three children as “perfect,” and Kelly confessed that her three are not so perfect.

Her oldest son, whom she refers to on the show as “He-Who-Must-Not-Be-Named,” is embarrassed because she hangs a note that he wrote when he was little, declaring that he would live with her forever. Kelly said that she plans to read it at his wedding. The Consuelos kids are now 15, 11, and 9, and Martin said that those are difficult ages.

Speaking of difficult ages, Martin brought a picture of himself from his younger days, and as Kelly put it, he was clearly “in the throes of puberty.”

Martin held up a picture that is making huge headlines across New York: an 18-year-old student was caught on camera looking very romantic with his 26-year-old teacher in a Greenwich Village park. At first, Kelly thought that he was the teacher and she was the student. But she still said that she is “old fashioned”– teachers should not be making out with their students! Both Martin and Kelly found it inappropriate, even though the boy is legally an adult.

Kelly confessed that she has never dated a younger man; even the age difference between she and Mark, who is just six months younger than her, bothered her at first. She said that she felt like a “cradle robber.” Martin jokingly asked her, “what about an older man?”

Kelly said she doesn’t like younger men, but she sure got excited over a new picture of a shirtless David Beckham in Elle UK. Martin finds all of his tattoos creepy, but Kelly said that they suit him. David is the magazine’s first male cover model ever. Kelly kissed the picture and even danced with it into the next segment.

They quickly had time to mention the latest Mark Zuckerberg controversy, over the fact that he and his new wife didn’t leave a tip at a restaurant in Rome. However, Kelly pointed out that it is customary to not tip a waiter in Italy and most parts of Europe.

During Spring into Spring Trivia, a caller won a trip to Green Valley Spa in Utah after correctly answering that Tim Daly was the other member of the Daly family that Amy Brenneman had co-starred with. An audience member also won a gift certificate to Beauty.com.

At the end of the show, Martin talked a bit about his new animated film,  Madagascar 3: Europe’s Most Wanted. The movie comes out June 8 2012 and features a huge ensemble cast as the talking gang of animals, including Ben Stiller and Jessica Chastain. He just returned from the Cannes Film Festival, which flew to on Ben Stiller’s plane. Kelly asked him if he took anything, and he said he took some soap.

Martin and Kelly watched an exclusive clip of Martin’s character, an Italian circus sea lion, getting shot out of a cannon.