Kelly and her friend Carrie Ann Inaba had some girl talk and dancing to open the show. They are very excited to welcome Zac Efron and the Jonas Brothers to the show today. It was the perfect day for Michael to be out because the women will ask all the right question

The last time these two besties were together they hosted the show in Hawaii. The staff had a special photo frame craft for Carrie to take away and remember the fun times. She said the photo means a lot to her since her family is from Hawaii.

Carrie Ann recently lost her father to cancer. She had been taking care of him before he went home to Hawaii. She said she is relieved that his suffering is over. They had a ceremony and sent his ashes out to sea. 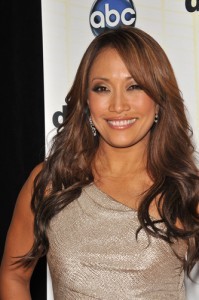 Carrie Ann Inaba and Kelly remembered the time they spent in Hawaii, where Carrie Ann grew up. (Featureflash / Shutterstock.com)

The NY Post ran photos of two men who are now persons of interest in the Boston Marathon bombings. They are seen in the first photo wearing black nylon backpacks, but then later photos show them without the bags. Authorities believe that these might have contained the bombs.

Carrie Ann said she was going through JFK and they alerted passengers that someone had left a bag in the area and had to come retrieve it. She said that security is more cautious about suspicious bags

The Boston Bruins paid special tribute to the victims at a game this week. The whole crowd sang the National Anthem and the players bowed their heads for the victims. Carrie Ann appreciated the moment of recognition and noted that people really pulled together in the moment.

Live: Dancing With the Stars Update

As a judge on Dancing with the Stars, Carrie Ann loves Andy Dick this season. She said she lost it when Andy danced for his daughter. Kelly said you don’t think of Andy Dick as an emotional person, but he’s like an onion with many complex layers.

There are three kinds of sweat: heat, stress and exercise. Stress sweat smells the worst. Kelly joked that she has all three at once and she gets botox to control her sweating. She actually has hyperhidrosis, and she sweats everything out all the time.

Anxiety and stress cause you to sweat from your armpits and pubic region. Kelly thought that exercise sweat would be the smelliest. Let’s be honest, sweat is sweat. It all smells.

Live: Handsome Men Kicked Out Of the Country

Three men were recently kicked out of a cultural festival in Saudi Arabia. They were deemed too handsome to stay in the country because women would be enticed by these men. Carrie Ann said that Zac and the Jonas Brothers wouldn’t even make it in Saudi Arabia.