On the first of May, there were plenty of special occasions to celebrate on Live! with Kelly & Michael. It was May Day, and also Lei Day, an event which has celebrated Hawaiian culture each year since 1927. Kelly, Michael, Art and Gelman all received leis to mark the occasion.

Most importantly, though, May 1 is also Kelly Ripa and Mark Consuelos’ wedding anniversary. The happy couple has been married for 17 years, but for Kelly, it “feels like minutes.” Mark may feel differently, though. Congratulations to Kelly and Mark! Here’s to many more. 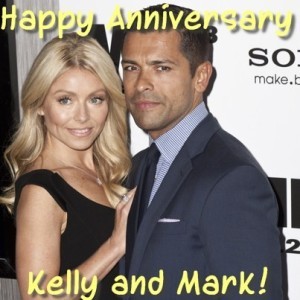 Kelly & Michael: Confusing Words Women Use To Talk To Men

So after 17 years of marriage, does Mark understand Kelly’s language? According to Babel.com, men may think they know what their spouse is saying, but she’s usually saying something else entirely. In an article called “Women Decoded,” they translated some of the most confusing words women use when speaking to their men.

For example, “fine” does not mean “fine” at all. The word is used to end an argument when women know they are right. “Five minutes,” if women are in the bathroom getting ready, means roughly “32 minutes.” However, if they’re telling a man to do something in five minutes, he’d better get up and do it!

“It’s okay- go ahead,” is not permission, but a dare. Additionally, “that’s okay – I’ll do it” is one of a woman’s most dangerous statements. It means you might want to find a new place to sleep that night! Does your spouse ever use these phrases when speaking to you? Kelly admitted to using a few of the same words herself.