Live with Kelly & Michael began with the hosts sharing the fun play date that they had had with their daughters. Kelly has a daughter named Lola, and Michael has twin seven-year-olds, Isabella and Sophia. Kelly was happy to tell Michael that his little girls are both more mature than her 15-year-old son (He-Who-Must-Not-Be-Named). Meanwhile, Lola embarrassed Kelly by pretending like her mother never lets her eat sweets, go anywhere, or do anything fun!

The girls went to Serendipity for the famous frozen hot chocolate, and then, they went to see the new Tim Burton film, Frankenweenie. The film was a little spooky, but the girls all loved it. 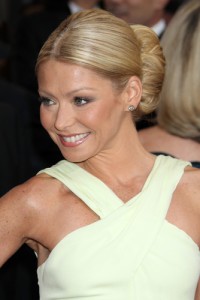 What could be more convenient than a breathalyzer you can carry with you to tell if you have bad breath? If only someone had thought of it sooner! Kelly and Michael both tried out the Topland Etiquette Checker, which measures breath on a scale of one (“irresistible”) to six (“death”). Michael was reluctant to try because he had just had coffee, but he and Kelly both scored a level two (“fresh”).

In case you’ve ever stolen anything from the Waldorf Astoria hotel in New York, it’s okay; the hotel has just announced a “give back amnesty program.” You can return whatever you stole, no questions asked! A man even returned a teapot from 1938.

Kelly and Michael have never stolen anything big from a hotel, but of course, they’ve stolen things like lotion and soap. Kelly even had some good hotel theft advice: take the lotion on the first night, so that they’ll replace it, and then you have a full-sized bottle to take home with you. Looks like she’s thought this through!

Michael Strahan was especially thrilled to report that the NFL referees are finally coming back. He said that finally, things will go back to normal, but of course, even those refs will make some bad calls every once in a while. Kelly found out that the refs had even left “lingerie football,” which she didn’t even know was a sport. It involves women playing football in very skimpy outfits. Kelly asked, “What man invented that sport?” and Michael responded, “A very smart man.”

Legendary “Moon River” singer Andy Williams has passed away at the age of eighty-four. Andy, who had enjoyed a long career in the music and entertainment industry,  lost his battle with bladder cancer. Kelly and Michael both sent their thoughts and prayers out to his family, and called the loss of Andy Williams “the end of an era.”

On a lighter note, celebrity superstar couple Kristen Stewart and Robert Pattinson are reportedly back together after Kristen admitted to cheating with her Snow White and the Huntsman director, Rupert Sanders. Robert was seen moving back into Kristen’s home after leaving when the scandal first broke.

And while many people don’t really get why they would reunite, Michael just attributed it to “young love.”