Kelly Ripa: Off the Rez Documentary

Kelly and Michael were both feeling optimistic on Monday morning: could it be that has spring finally sprung? The forecast for today’s temperature read 59 degrees, which feels like bikini weather in comparison to the chilly temperatures New Yorkers have been suffering through. However, Kelly advised everyone to keep their winter coats ready, just in case.

Kelly had a great weekend. First, she attended a surprise party for a friend, but was so afraid of ruining the surprise she barely whispered when he finally arrived. Then, she and Mark were thrilled to learn that Shoni Schimmel, Louisville basketball player and the subject of their documentary Off the Rez, would be entering the finals. Kelly and Mark produced the inspiring documentary film a couple of years ago, and it will be re-airing on the Discovery Channel on Tuesday, April 9 2013. Don’t miss it! 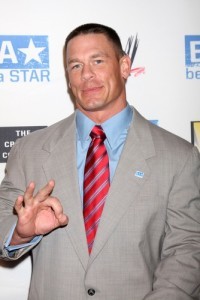 Michael pointed out that the Louisville men will also be in the finals. They will be playing Michigan in the championship game.

Michael’s sons were both visiting for the weekend, so he took the boys to the car show on Saturday and Wrestlemania on Sunday. The star-studded event was filled with celebrities like Snooki and even Billy Gibbons from ZZ Top. Michael brought some photos from the event, including one of his favorite WWE star, the Undertaker, getting slammed by CM Punk. Backstage, the boys had the chance to meet Dwayne Johnson, aka The Rock.

In the end, John Cena was declared WWE Champion. Michael issued a challenge to John, because Michael just so happens to have his very own WWE belt, given to him by the Rock. He told John to “come smell what the Strahan is cooking!” and Kelly promised to back him up in the fight.

If you think “OMG” is a modern day creation, think again! In a letter to Winston Churchill from 1917, an Admiral was quoted as saying “OMG (Oh My God).” Kelly thinks it must be a hoax, but it’s not April 1 anymore, so it must be true!

Kelly said that when her kids text her, she has no idea what to respond. She even believed that “LOL” meant “Lots of Love.” Come on, Kelly, even my grandmother knows what LOL means!

When Kelly announced that the era of the super crab is upon us, Michael couldn’t help but clarify, “you mean the kind you eat, right?” Thankfully, the answer is yes. Crabs have been munching on carbon pollution and have now become super-sized. Luckily, the pollution only affects the shell, so they’re still safe to eat. The words “carbon pollution” aren’t exactly selling me, though.

In a surprise that no one saw coming – not even Kelly or Michael – WWE Champ John Cena appeared on set. Suddenly, Michael became pretty scared! John seemed disappointed that Michael was “talking trash” about him, but he wasn’t looking for another fight. He just came for an apology!

“In my defense, I didn’t know you were coming!” Michael said. Eventually, they worked it out like grown ups and hugged it out. That should teach Michael a valuable lesson in trash talking!