With Kelly Ripa away on vacation, Michael Strahan was joined by guest co-host Kristin Chenoweth. Michael and Kristin recently saw each other at the Oscars, where she was extremely nervous. Not only did she host the red carpet, but she also performed with Seth MacFarlane at the end of the show. Talk about pressure!

Michael knew that Kristin would make a great guest co-host, because he recently received an auspicious sign. While walking past Lincoln Center, a billboard with Kristin’s picture popped up right in front of him. Kristin explained that it was for a PBS special she filmed that honors American composers. 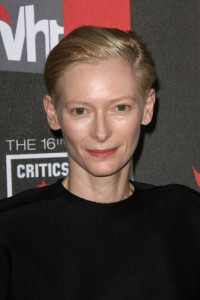 Kristin seemed to be fitting right in, but one thing she doesn’t enjoy about hosting is having to wake up so early. Since Michael is a guy, he just rolls right in before the show starts. Kristin, however, had been there since 7 am for hair and makeup.

Academy Award-winning actress Tilda Swinton recently surprised New Yorkers by appearing at the Museum of Modern Art. Tilda’s piece is entitled Maybe, and Michael thinks it’s the perfect title. “She may show up, she may not,” he said.

Tilda will be sleeping in a glass case at the MoMa in intermittent periods and won’t reveal exactly when or for how long. She’ll only have a mattress, pillow, water and her glasses. So if you’re hoping to catch a glimpse of Tilda Swinton at MoMa, I’d suggest camping out at the museum for a few weeks.

Michael was sipping on a cup of warm green tea, because he wanted to keep his voice nice and warm. He warned Kristin that he and guest Usher had a karaoke sing-off competition planned for later in the show. Kristin admitted that karaoke makes her nervous, because people have high expectations of her voice.

Michael gave a preview by singing a few notes of Usher’s hit song, “Climax.” “On a scale of one to 10, you’re a tenor,” Kristin joked. Michael is the undefeated karaoke sing-off champion, so Kristin will be taking a swipe at his crown.

Michael started a discussion on a British woman who claims to be allergic to exercise. When her heart begins to beat fast, she breaks into hives and her face begins swelling. Is it possible to have an exercise allergy? Michael and Kristin both believe it’s something else.

Caller Cathy won a trip to the St. Julien Hotel & Spa in Boulder, Colorado by answering the following question: What city was the top destination that people are moving to in the United States? The answer is Atlanta, Georgia. Plus, an audience member won a $500 Fandango gift card.