Live! With Kelly & Michael started with a tribute to Joan Rivers on September 5 2014. They said they were deeply saddened by her passing away and then started a montage while talking about her life and career. She’s been a part of the Live! family for decades. Kelly’s voiceover said that her greatest love was to make people laugh and that’s what they were going to try to do for the next hour. The show was prerecorded yesterday, before her death, so they added this in beforehand for her. They said they love her and she will be missed. Then they showed her being constantly introduced on the show and her coming out into the set. Then they showed some of her jokes and some of the things she did on the show. It was a really sweet and touching tribute to her. 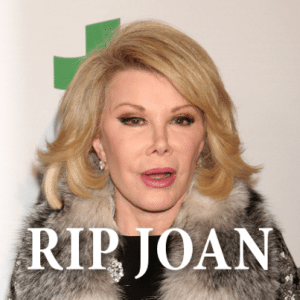 Kelly came out in the show dressed all in black and ready for the Tough Mudder Competition. Kelly looked over and asked Gelman what that big obstacle was on their set. He said it was the first part of Tough Mudder. They were starting inside. Kelly was upset because he had said nothing about heights. She also said that Gelman looked like a little boy going to third grade today, and Michael was wearing knee pads. He was going to put his elbow pads on later and he already had a jacket on to stay warm because he knew he would be cold later. Michael asked if Gelman would make Regis do the Tough Mudder, and Kelly answered no instantly and emphatically. He paraglided with Gelman though. Kelly said that was before he figured out he could say no.

Michael talked about all of those people who have been mad on flights because of the seat reclining lately. There were some fights and there’s a device you can put in to keep it from reclining.

One woman threw a drink in a guy’s face while another hit a sleeping woman’s head. Kelly said that leg room is never an issue for her. This is a greater issue that’s happening in society though. Kelly said that we’ve become really unkind. Maybe we’re all overstimulated or so used to social media, but we’ve dehumanized one another. She said that kids are watching our example.

Michael said he’s a leg room connoisseur. He always looks back and goes slowly when he reclines, but there are times when there are issues. He talked about Deacon Jones; when a lady rammed her seat back and he freaked out at her.