Kelly Ripa said that Michael was “Santa Claus” before the show started, because he was giving out extra tickets to the New York Auto Show. Once the show began, Kelly shared the news that she and Lola had a disastrous dress shopping experience. I remember those with my mom quite fondly!

Lola is going to her first ever Bat Mitzvah without Kelly, so Kelly needed to make sure she looked appropriate for Temple. What ensued was an enormous argument in the store featuring shedding tears and plenty of foul language. Finally, they agreed that Lola would wear the dress Kelly wanted her to wear to the Temple and the dress she wanted to wear to the party – with a sweater. 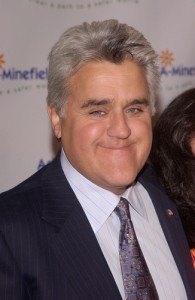 Michael understands because he has an older daughter. Combined with Nicole’s kids, there are seven girls, and their wardrobe always perplexes him. He doesn’t want to be “the old parent,” but super short shorts and bare leggings definitely freak him out. Of course, this was the perfect opportunity for Gelman to flash Michael’s now-infamous short short picture. It was only a matter of time before we saw another embarrassing picture of Gelman.

It’s finally official: Jimmy Fallon will be replacing Jay Leno on the Tonight Show. Although we’ve been hearing rumblings of this news for weeks, many people (including Kelly) assumed it was just a rumor. We went through the same thing with Conan O’Brien just a few years ago.

Jimmy Kimmel tweeted his congratulations to Jimmy Fallon, who he joked was “a formidable rival and an incredible lover.” Jay Leno took another jab at Dave Letterman, joking that “he didn’t get the Tonight Show again.” Michael is looking forward to Jimmy Fallon on the Tonight Show, although he said that all the late night hosts are so great at what they do. Besides, Jay will now have more time to spend with his cars!

Kelly said that Jay Leno has apparently never cashed a check from The Tonight Show! Do you think that’s true? He lives completely off his stand-up appearances in Las Vegas. He also received a $15 million dollar bonus to leave the show early. Now that check I would cash! What do you think? Is Jimmy Fallon replacing Jay Leno a good move for the Tonight Show?

Did you know that there’s a word to describe when a song gets stuck in your head? Apparently, it’s called earworm. Causes of earworm include stress, memories or traumatic events (like a breakup). The most common earworms are songs by Lady Gaga, ABBA, Kylie Minogue and Queen. Somehow, this news led to Kelly lip-synching “Bohemian Rhapsody” and performing a dramatic reenactment. Michael didn’t know the words, so he just started voguing.

U.S. fans rejoice because the Rolling Stones are planning a North American tour. Kelly must have had a lot of coffee this morning, because she also decided to perform her Mick Jagger impression. She referred to the iconic lead singer as her “body doppelganger.” In all fairness, she did do a pretty great impersonation. Mick Jagger reminds Michael of a weeble-wobble.

Here’s an incredible story of someone overcoming something truly awful. When he had just graduated high school, Brian Banks was wrongfully convicted of a violent crime. He was supposed to go to USC, but instead spent time in jail. Now, after being released, he has spent all of last year fighting his way back and has now signed a contract with the Atlanta Falcons. That’s amazing news, but what’s even more amazing is how positive Brian remains to be. According to Michael who knows Brian, he isn’t bitter at all, as many people would be.

Unfortunately, caller Diana lost out on a trip to the La Playa Beach Club in Naples, Florida, plus a $1,000 T.J. Maxx “wild prize” gift card. The March Into Spring Travel Trivia question was: In what 1987 film did we say a character was seen speaking on one of the first cell phones? The answer is Wall Street. Still, she and an audience member won a $500 Fandango gift card.