There’s a recent study that says that because people’s right hands are dominant and associate that with good as opposed to the left hand, which is associated with bad or weakness, more people are naming their babies with letters on the right side of their keyboard. As a leftie, I find that ridiculous. There have been leftie presidents, and Jerry Seinfeld as well as Kelly Ripa’s son are lefties.  Some names people are choosing are Noah, Liam, Emily, and Olivia. This wasn’t a problem before computers, and maybe people are doing it subconsciously now. All of Kelly’s kids’ names are on the right side. 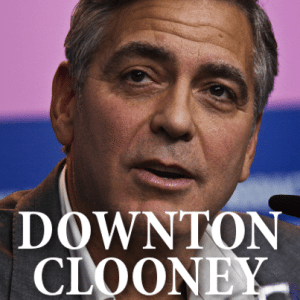 George Clooney will play a wedding guest on ‘Downton Abbey’ and will also be getting married soon in real life. (cinemafestival / Shutterstock.com)

There’s a new map that shows where people use the word “Um” versus “Uh” in America. Kelly thought that the map seemed to line up politically. The “Ums” were mostly on the East Coast, which was really interesting.  I think I say “Um” if I really think about it. Michael Strahan changes when he’s in different places. “I’m multi-lingual,” he said. Mark Consuelos says, “Eh, eh, eh, eh,” which is like “yeah, yeah, yeah.” A lot of people also say “like.” Kelly asks Lola if she can get through a sentence without saying like, and she says, “Like can you?”

George Clooney is going to make an appearance on Downton Abbey around Christmas, which is so exciting. He’s going to be playing a wedding guest. He’s actually getting married in Venice this month, so maybe it’ll help him prepare for the role. It’ll be cool to hear his English accent. Mark apparently calls it Downtown Abbey.

Kelly & Michael pointed out a couple in the audience that’s been married for 48 years. The secret is to always agree with whatever she’s saying.

The Time to Smile Travel Trivia dancer was Janie Starkie from Pennsylvania. Jeanie Walter from Vancouver, Washington was the contestant. She always has a date day on the weekends with her husband. She’s been married for 40 years. Of course she has date nights as well. She has three children, eight grandchildren, and two great-grandchildren in California and Kansas. She played for the Fairmont Mayakoba Resort in Mexico. It’s valued at $7,500. The question was:

What country did we say is the happiest in the world?

She took a while, but she got it right! It’s Panama. She picked number 44 to get a $500 gift certificate from Fandango.