A while back before the Super Bowl, Michael and Kelly made a bet. If the 49ers won the Super Bowl, Kelly agreed to eat chicken wings, something she is completely disgusted by. If the Ravens won, which they did, Michael would have to go through Kelly’s workout with her.

Well, Michael lost the bet and that meant he had to go with Kelly to her workout class with Anna Kaiser, a personal trainer who came up with the grueling Anna Kaiser Technique. 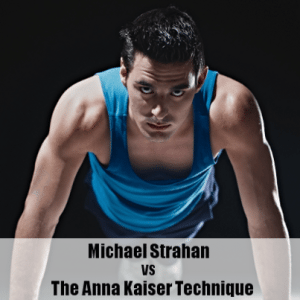 To pay back the bet he lost with Kelly Ripa, Michael Strahan agreed to do the Anna Kaiser Technique workout with Kelly.

At the end of the workout, Michael was hardly standing. This pro football player, who has a Super Bowl ring, has been to the Pro Bowl and makes quarterbacks wet their pants when he is charging at them, couldn’t even finish the AKT Workout, a workout Kelly seemed to breeze through.

During the workout, Michael said he has been to training camps with some of the most fit athletes in the world and the Anna Kaiser Technique would tear those athletes to pieces.

The workout didn’t look too hard at first. Kelly and Michael were just doing some dance moves and jumping around a lot. I think it began getting really difficult when Anna told them to do pushups but with a ball between their hands. So, basically, they would do a push up with the ball in one hand and then roll it to the other hand and do a pushup with the ball in their other hand. They kept doing this for a while but Anna jumped on Michael’s back at one point and I thought he was going to collapse.

At one point Kelly thought Michael was so mad with her he wouldn’t speak to her. In all reality though, he said he was simply too tired to talk. When it came to the final exercise, Michael just had to call it quits. He couldn’t go on any longer.

So how does the petite Kelly Ripa find the energy to do the entire workout? She told Michael she has no idea. She joked that she has to go through an out-of-body experience to finish the workout. Michael should have tried the technique because he said just 10 minutes into the workout he was beat. Regardless of how he thought he did, Kelly and Anna were both very impressed with how well Michael moved for such a big person.