On Wednesday, Kelly Ripa and guest co-host Mark Feuerstein addressed the latest news on the Boston Marathon bombing. It’s now been revealed that pressure cookers were used to make homemade bombs, although authorities still don’t have a suspect.

Mark Feuerstein said that his heart goes out to all the families. He and Kelly were especially moved by Martin Richard, the eight-year-old boy who lost his life. The heart-breaking sign he made in school – it read “No more hurting people – Peace” – has been plastered all over the media as a testament to his memory. 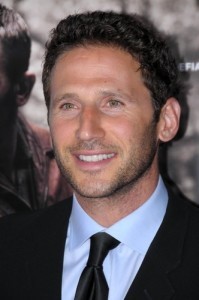 On a lighter note, Mark Feuerstein revealed that he had just returned from Budapest, Hungary. Mark’s hit USA series Royal Pains was shooting an espionage-themed episode on location, which made him feel like Jason Bourne. He even cut his ear while filming a kidnapping scene.

For those who don’t know, Mark enjoys rapping and has already shared his talents on Live! in the past. But what happens when an amateur rapper meets the most famous rapper in the world? That’s what happened when Jay-Z walked onto Mark’s plane on the way home from Budapest. Mark really wanted to go up and talk to him, but he chickened out. “I was terrified,” he admitted. Wouldn’t we all be?

Kelly then shared a pretty scary story that thankfully ended happily. While she was at the gym yesterday, a man ran into her dance room and said there had been a family emergency. Immediately, Kelly feared the worst, thinking of her parents and kids.

Finally, after getting a hold of Mark, Kelly learned that Lola had hurt her arm at school. When Lola said she’d gotten hurt playing frisbee, Kelly was skeptical and thought she just wanted to get out of piano lessons. After an x-ray, she was sent home. However, halfway through the car ride home, Kelly received another call. Lola actually had broken her arm – the doctors had made a mistake and were looking at someone else’s x-ray.

Now, Lola is very excited to have a tie dye cast and to have broken a limb like both of her brothers.

Kelly reported that the “green juice craze” is taking over New York City. Juicing even made the cover of the dining section of the New York Times. Kelly enjoys drinking green juice because of health benefits. Mark does too, although he did admit that it “tastes a little like astroturf.” It’s funny that they mention it, because I’m in a bit of a green juice phase myself. Do you like drinking green juice?

Good news for Botox users like Kelly! There’s a brand new place to inject Botox, but only if you need it; injections are now being used to treat overactive bladders. Kelly doesn’t need that quite yet, but she does receive Botox in her armpits to stop sweating. Mark decided that he’d like to try that, because his nickname in Budapest was “Budapits.”