As the first full week of hosting duties for new co-host Michael Strahan began, Michael was just getting comfortable on Live! with Kelly & Michael September 10. The 6’5″ former football player had just gotten off a plane from Los Angeles, where he was covering the new season of football for FOX. Kelly wanted to know, when Michael sits on a plane, where do his legs go?

Michael did admit that sitting on a plane is difficult for him, even in first class, because of his large stature and the fact that his knees don’t quite bend like they used to after a long career in football. However, another reason that Michael couldn’t get any rest on the plane was because of Kelly’s husband, Mark; he gave Michael an iPad filled with great shows to watch, including the critically acclaimed AMC drama Breaking Bad. Michael started watching episode after episode and couldn’t stop. Kelly called Breaking Bad the show that makes you want to become a crystal meth cooker! Michael told Kelly that he’d visit her in jail. 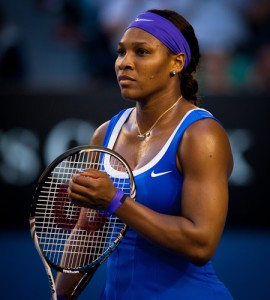 Fashion Week in New York City just recently kicked off, and Michael asked Kelly if she had taken in any shows. She hadn’t, but one person who has appeared is Michael’s fiance, Nicole, who walked on the runway for designer Omar Salam. Michael showed off some pictures of Nicole, who looked stunning–and very high fashion–as she modeled in the show.

Kelly isn’t a high fashion model, but she does have some experience with the runway; she once walked for the Red Dress charity fashion show to benefit women’s heart health. Kelly wore a red Diane Von Furstenburg wrap dress, and said that she “brought the house down” with her runway strut. She even gave a little demonstration.

Michael and Kelly took a look at a video that Kelly’s friend sent her, of an old man drumming his heart out. Then, they discussed Gaithersburg Elementary School in Gaithersburg, Maryland, which has abolished homework for all students. Instead, they encourage children to read for thirty minutes each night. “Reading for thirty minutes every night should be a mandatory thing for all people,” Kelly said.

However, Kelly did point out that homework is sometimes helpful for her kids, because it serves as “a reminder” of what they learned during the day. She emphasized that it depends on the child.

Unfortunately for Kelly and Michael, they were not invited to the wedding of Blake Lively and Ryan Reynolds…because it was a secret! The intimate ceremony took place this weekend in South Carolina between the two gorgeous actors, who starred together in the 2011 film The Green Lantern. Congratulations to Blake and Ryan!

The audience got a huge surprise when U.S. Open Champion Serena Williams joined Kelly and Michael to discuss her latest title. The accomplished and decorated tennis star also just recently brought home an Olympic Gold Medal from the London Games, so she has a lot to celebrate! Serena received a standing ovation from the crowd as she made her appearance.

To gain her U.S. Open title, Serena had to defeat the number one ranked tennis player in the world, Victoria Azarenka. It was no small feat, but Serena managed to get it done! At one point in the game, Serena was just a couple of points away from losing. Serena explained that she tried to stay focused as best she could; and she didn’t let Victoria’s trademark grunt distract her.

Some people may not know, but last year, Serena suffered a major health scare. She had a pulmonary embolism in each lung, which put her in the hospital for quite some time. Serena said that the experience taught her to take notice of her body and pay attention to her health. The experience must make all of her recent successes just that much sweeter! Congrats to 2012 U.S. Open Champion Serena Williams.

After sifting through 100,000 photographs of adorable children from all across America, the Live! Cutest Kid Search finalists have been chosen. Here they are:

On Live September 11, we’ll meet the six cute babies and big kids in person, when they head to New York to make their television debut!