Kelly Ripa woke up to find her co-host, Michael Strahan, in the morning newspaper. Michael was chosen as this year’s “First Mow” at Sheep’s Meadow in Central Park, kicking off the spring season. At first he wasn’t sure how to use a mower, but he did so well, he’s considering a part-time mowing job! In fact, Michael’s first job ever was cutting lawns to raise money for his first bike.

Kelly and Michael both agreed that Central Park is a can’t-miss landmark. Kelly called it “the crown jewel” of New York City. Every day, people work hard at maintaining it and keeping it beautiful for visitors and locals alike. So if you’re planning a trip to New York, definitely stop by the park. 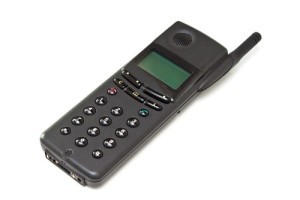 Kelly & Michael chatted about the 40th anniversary of the cell phone and the Landfill Harmonic movie.

Gelman had an early cell phone, and he thought he was Don Johnson. A few old pictures of Gelman were flashed on the screen; one of him in his “Sally Jesse Raphael” glasses, and later, Gelman dressed as Lady Gaga. They just love to torture him!

In other phone news, 212, New York’s iconic area code, will now be handed out to other states. Kelly and Michael were not pleased at this news, because area codes are very precious to New Yorkers. Harlem Rapper Azealia Banks even wrote a song about it, “212.” Michael pointed out how New Yorkers laughed at people who had 917 area codes. Or, the dreaded 201, which meant you were from the forbidden zone: New Jersey!

To make sure Michael never buys potpourri as long as he lives, Kelly shared the story of a woman whose potpourri contained a snake. She first heard rustling in the kitchen and then found a snakeskin that had been shed in the bowl. Now, she’s terrified to go to sleep, because she can’t find the snake anywhere. What’s worse is the potpourri was from India where poisonous snakes are prevalent.

Kelly joked that the woman should have specified “with” or “without” snakes when ordering her potpourri. Michael then noticed Mike Murphy in the audience, who is head of Giants security. He wouldn’t be much help in this situation, though, because he’s afraid of snakes as well.

News has broken that former New York Met Mike Piazza is set to star in a Miami ballet. In reality, though, Mike is only appearing with his two young daughters, so don’t expect to see a tutu.

Kelly pointed out that in a male ballet costume, “all the bits and pieces” are shown. This got Kelly thinking they should get Michael into one. Maybe next Halloween?

Michael’s friend is doing a movie called Landfill Harmonic, and it’s based on a group from Paraguay. They search through garbage and later make instruments in order to teach children the importance of music. Michael shared some pictures of the instruments which are made out of found objects like bottle caps. Check out landfillharmonicmovie.com for more information and to help this organization.

Speaking of music, has everyone seen six-year-old drummer Avery Molek? His video recently went viral, and Gelman promised he’d try to get him on the show. Kelly was reminded of a young Justin Bieber.