After reading a recent comment about TV’s Dr Oz, David Letterman and his staff got an idea for one of their nightly Top 10 lists. Plus, the talk show host had a chance to prove his mettle in a fast-paced origami frog challenge.

Before the evening’s top 10 list, a siren sounded in the studio, and the announcer informed everyone that it signaled the beginning of an Origami Challenge. 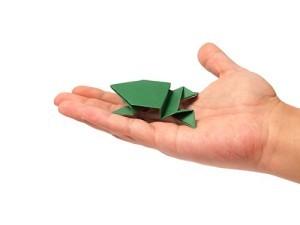 David Letterman made an origami frog and shared the Late Show’s list of the Top 10 Signs Your Doctor Has Gotten Rusty, inspired by an article on Dr Oz.

Someone brought Dave a piece of paper, and he was given 30 seconds to attempt to create a crab using the paper folding art of origami. The band played and the audience cheered him on as he worked his magic.

Despite his protestations, he had obviously practiced this, because he made quite a nice origami frog. However, the announcer reminded him he was supposed to have made a crab.

Are you any good at origami? I don’t think I could make anything but a paper airplane in just 30 seconds.

In the February 2013 issue of the New Yorker magazine, a doctor who hired Doctor Oz in 1985 said that he would no longer send his patients to the TV doctor, who may be distracted with his media empire. Could your doctor be distracted as well?