David Letterman: Traveling With Your Monkey

Justin Bieber has been generating a lot of attention this week after his pet monkey was confiscated in Germany. Dave talked about considerations to take before traveling with your monkey, so it is not quarantined like Bieber’s was. 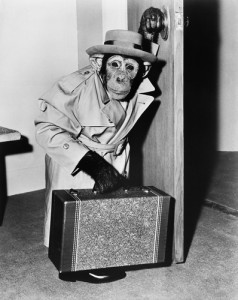 In light of Justin Bieber’s recent troubles, David Letterman shared the Late Show’s list of the Top 10 Questions To Ask Before Traveling With Your Monkey.

Dave held up The New York Times front page from April 2 2013, in an effort to distinguish the night’s impending appearance by frequent guest Regis Philbin. This was a new episode, for what that’s worth.

Letterman said that he feels his show staff and crew are like a family. George Clarke, building engineer at the Ed Sullivan Theater, recently put together video segments about the behind the scenes workings of the facility.

George and a camera visited the building’s 10th floor, which according to joke legend houses an aquarium. That sounds like quite a tour.

“I love it when the setup is longer than the bit,” Dave said, which is probably something the curmudgeonly host does love.

Justin Bieber’s monkey trouble in Germany has made the late night shows this week. His world tour has taken him all over the place, but his pet monkey is coming as a surprise to some.

David Letterman: Top 10 Questions To Ask Yourself Before Traveling With Your Monkey

The night’s Top 10 list was inspired by Justin Bieber. Dave said his advice would be not to adopt a pet monkey. “The banana money alone is going to kill you,” he suggested.

Here are the Top 10 Questions To Ask Yourself Before Traveling With Your Monkey.