David Letterman and Paul Shaffer recalled their time together at NBC on the original Late Night show in 1982. After Letterman was passed over for Jay Leno to replace Johnny Carson on The Tonight Show, Dave packed up and moved to CBS, where he has been ever since.

Now Jimmy Fallon, who currently hosts Late Night, Dave’s previous series, is being given the top spot on Tonight in 2014, when Jay Leno rides off into the sunset. Ex-Late Night host Conan O’Brien, who briefly hosted Tonight before being replaced by Leno once again, now has a program on TBS 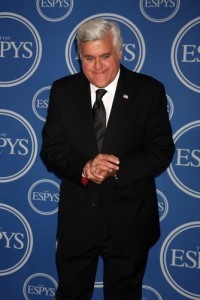 “Something’s wrong here. This happened once before with Conan O’Brien and then they had to bring Jay back,” Dave said of the confusing situation that is giving TV fans deja vu.

Letterman said he has known Jay Leno for 38 years. Dave congratulated his friend for going out on top. “How many times can a guy be pushed out of a job, and what’s the matter with NBC?” Dave wondered.

Those are some good questions, and Shaffer and Letterman came off looking humble and self-deprecating in their banter about the situation. “Is there any way NBC can push me out of this job?” Dave asked.

He also considered the problem of going head to head each night with two hosts named Jimmy: Jimmy Fallon and Jimmy Kimmel. What do you think will happen when NBC bids Jay adieu once more in 2014?

What will you miss most about Leno? Share it in the comments.