As March has given way to April, it is time for a few annual occurrences to pass by. The NCAA Tournament has crowned a champion, and April 15 Tax Day is right around the corner. That inspired tonight’s Top 10 list. 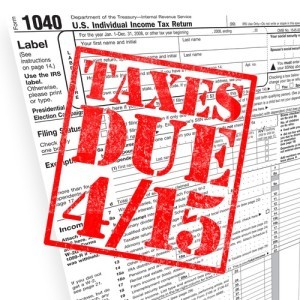 On the Late Show, David Letterman shared a reminder about the April 15 tax deadline and a Top 10 list of Things You Don’t Want To Hear From Your Accountant.

The NCAA tournament is now over, and it is time to see who won the bracket in your office pool. April Alcoholism is the natural follow-up to March Madness, according to Letterman. The people who enjoy the tournament the most, he said, are students at the schools and people who gamble on the games.

Louisville triumphed over Michigan, 82-76, and Dave shared an NCAA Tournament Recap, showing how the bracket ultimately came together by the end of the weeks-long competition.

April also means it is time to get your taxes straightened out, if you haven’t already. Time is running out, because the April 15 deadline is Monday.

“If you don’t pay your taxes, you go to a federal penitentiary,” Dave said, reciting a monologue about fatherhood and beatings with Paul Shaffer.

Late Show: Top 10 Things You Don’t Want To Hear From Your Accountant

The topic of the night’s top 10 list was Things You Don’t Want To Hear From Your Accountant. Ten accountants from the New York City area were on the show to present the list. Aren’t they really busy this time of year?