Home > Late Show with David Letterman > Late Show Jokes
When you buy through our links, we may earn an affiliate commission. As an Amazon Associate we earn from qualifying purchases. Learn more.

Dave poked fun at past guests Kim & Kourtney Kardashian, as well as one of the year’s first big scandals, surrounding Manti Te’O. The jokes also touched on flu season and the Detroit Auto Show.

Dave started the show out slowly by sharing his favorite pickup line from back in the day: “How you doing?” He also tried, “I’ll park your car for you,” which might have been more successful. 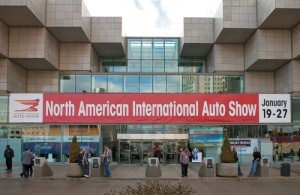 After the Detroit Auto Show, Letterman wondered what’s coming next for the city. (Darren Brode / Shutterstock.com)

Remember Manti Te’O? So does this encore presentation of the Late Show, though I suspect we’ll all be experiencing foggy recollections by the time the next holiday season rolls around. Te’O, the Notre Dame star, was in a fake online relationship with a girlfriend who did not exist.

Back in Letterman’s day, a girl would just give out “imaginary phone numbers.” He said that another woman faked her death to avoid being his prom date.

Dave said he thought this was almost the creepiest thing that happened at Notre Dame, other than Regis Philbin’s pep rally appearances. Kris Humphries was the only other athlete Dave could think of with an imaginary girlfriend.

The Kardashians, Kim and Kourtney, paid a visit to the Late Show. Letterman looked back fondly on their repartee, during which he claimed they discussed the debt ceiling. And they say late night shows don’t repeat well.

Earlier in 2013, the Detroit International Automobile Show took place in Detroit. Letterman explained that there is even more fun to be had in Michigan after the show itself.

“Next month, don’t miss the Detroit Giant Turntable Show,” an announcer quipped. I have never been on a turntable, but it seems like a giant, slow-moving merry-go-round.

This year’s cold and flu season was so bad that Dave said one church had to replace its holy water with Purell. Did you get the flu this season? I got my first ever flu shot, but we will never know if that is why I did not get the flu.

David Letterman joked that New York City was offering a service to help people who were too busy to get flu shots, by simply pouring Vick’s off the roofs of buildings onto pedestrians below. That’s one way to go about it, and there are worse things to be doused in from a roof.

A Revolutionary War cannon was recently discovered in New York’s famed Central Park. The cannon was loaded with powder, which was proof of a failure in the city’s “See Something, Say Something” policy.

Hopefully people clean their homes more often than Central Park apparently gets a working over. How often do you run into a literal loose cannon? It is really true that New York has everything.