Home > Late Show with David Letterman > Late Show Interviews
When you buy through our links, we may earn an affiliate commission. As an Amazon Associate we earn from qualifying purchases. Learn more.

Making her first visit to David Letterman’s show in six years, and her first public appearance in several months, Lindsay Lohan went through with her promise to appear on the Late Show. From Scary Movie 5, Lohan wore an orange floral print dress for her conversation. What is the Lindsay Lohan rehab plan? Dave didn’t quite get it out of her, but not for lack of trying.

Lindsay started the interview by joking that she thought she was going on Jimmy Fallon’s show. Lohan first appeared on Dave’s old Late Night show on NBC, wearing a Halloween costume. 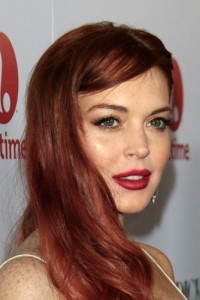 David Letterman landed a rare appearance by tabloid fixture and Scary Movie 5 star Lindsay Lohan, who was game for most of his antics. (Helga Esteb / Shutterstock.com)

Lohan is certainly the butt of a lot of jokes, which Dave definitely copped to being a part of. He even read her some of the tales he has told about her.

She was cagey about whether she “steals stuff,” turning the question back on Dave. She told everyone that it’s not true that the courtroom cafeteria named a sandwich after her because “they don’t let you eat there.”

What about her trip to rehab? She told Dave that she is headed to a program for three months, starting May 2. She said she has been to rehab several times, bristling because “we didn’t discuss this in the pre-interview.”

What’s ahead for her in the new rehab program? Lindsay said she is happiest when she is healthy and working, and she is taking advantage of the opportunity to get back on track.

Dave called it a potential “life saver and career saver.” Letterman pressed her about her addictions or what she might be addressing in treatment, but she deflected his questions.

Lohan’s voice was notably gravelly, and she even swiped Dave’s notes, while commenting that she did community service at the morgue with Heavy D.

“I’m a target. I’ve always been,” she said, taking responsible for past immature decisions. “You grow up and you mature…. What else am I supposed to say when it’s a process of life?”

Dave said she was lucky to have a chance to go to rehab and take it seriously before her situation spiraled even further out of control. “The next time I come on the show, that will be in my past,” she predicted. Well-played, Lindsay; she is saying all the right things.

Dave said that you have to put out the fire before taking care of faulty wiring, but the analogy wasn’t sinking in. “I’ve gone through a lot of life,” Lindsay claimed, focused on her me time.

She threatened to take over Dave’s show after her rehab stint.

“You win by taking care of your life, because people are rooting against you now,” Dave said.

Lohan recently appeared in Charlie Sheen’s FX sitcom Anger Management. They made a plan while working together on Scary Movie 5.

Lindsay deflected questions about her financial arrangement with Sheen to Charlie himself. She did not have a bad word to say at all about anyone he worked with.

Dave did give Lindsay credit for taking the jokes and coming on the show after everything that has been said about her. I think that caught her off guard, because she started crying.

You can watch Lindsay Lohan and Charlie Sheen together in Scary Movie 5, opening in theaters April 12 2013.