Home > Late Night with Jimmy Fallon > Late Night Jokes
When you buy through our links, we may earn an affiliate commission. As an Amazon Associate we earn from qualifying purchases. Learn more.

As is obligatory, Jimmy Fallon started his show with jokes about new Pope Francis. He also teased a potential summer Lady Gaga wedding, the White House calligraphy budget, and the world’s smallest book. 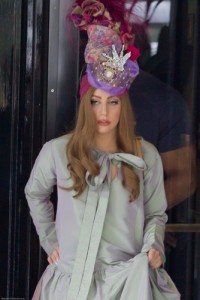 Which country of the world do you think is home to the most efficient tire changer? (Mr Pics / Shutterstock.com)

As a late night talk show host, Jimmy Fallon was obligated to mention the newly elected Pope Francis. He said that the man we now call the pope used to be a chemistry teacher. Could that be the possible end of Breaking Bad?

A New York bakery has been selling cookies with a picture of the new pope, which should add to the guilt of eating desserts. Onlookers waited in Vatican Square for an hour before the new pope emerged, and there is speculation that the doors were stuck.

There is a rumor that Lady Gaga and her boyfriend might be planning a summer wedding. “Just today, I saw her at a deli picking out her dress,” Fallon said.

The White House spends $250,000 per year on calligraphy, which has come under scrutiny during the sequester.

Costco announced making $537 million in the most recent quarter. What are customers going to do with all those extra rolls of paper towels?

The physical book measures fractions of an inch on each side, and Fallon joked that it’s called Taylor Swift’s Guide To Successful Relationships.

Snoop Dogg (Snoop Lion?) recently said in an interview that he would like to get high with President Barack Obama and Bill Clinton. Is Snoop Dogg ever not high?