Are those wedding bells ringing on Jerry Springer March 12 2013? It’s pretty easy to mistake them for Jerry’s fighting bells. A bride just wants to marry her man, but the other woman has plans of her own. Is this fiancé true to his bride, or does he have a honey on the side? 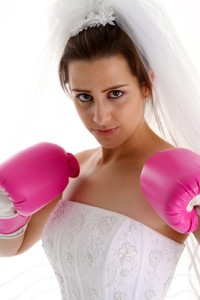 On March 12 2013, Jerry Springer has a bride that’s hearing fighting bells over her wedding bells.

The other woman said she loves that the bride is hurt by the situation, but the bride starts name calling. I think that just proved the hurt point. The other woman want to know just how dumb the bride was to not realize her man was a cheater.

We can see it in the bride’s eyes: Honey, hold my veil while I take this woman down. Once they all calm down, Jerry will read the lie detector test. This couple could be reading their vows or divorce papers.

Just when you think you’ve seen it all, another group comes on Jerry Springer that makes your jaw drop.

Aaron’s wife wants to give him a preview of what’s going to happen when they get back to their hotel room. Jerry’s team rolls out a bubble bath with another woman in the tub. Aaron’s wife climbs in and they help each other clean up. Aaron and his fellow men in the audience are clearly excited. What did Aaron do to deserve this treat?

Why she needed to come to Springer to show us all this is still a mystery.