On today’s show, Jerry Springer encounters a couple that is being torn apart by a cheating scandal. This isn’t interesting enough for Springer, so throw in the adult film star and you have a violent show. Bells go ringing when she steps out and tells the girlfriend that she loves practicing for her career with her boyfriend. 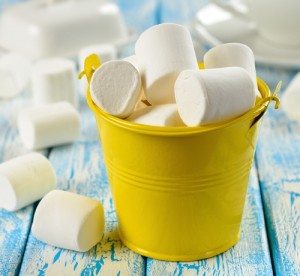 On February 27, Jerry Springer is helping a lesbian find love with a marshmallow eating dating contest.

“Anybody can be an adult film star. What is that to be proud of?” the girlfriend asks. Dreams still intact, the woman continues to flip her hair after a beat down.

That first segment wasn’t enough crazy for Springer, but this one takes the show to it’s famous crazy levels. Three lesbians are having a marshmallow eating contest. For an unexplained reason, they find stuffing their faces with as many marshmallows as they can attractive.

I believe this marshmallow eating dating contest was a type of dating game where one woman wanted to find her sugary soulmate. It looks like she’s finding more than one love on today’s Jerry Springer.

Want to see more coverage of Jerry Springer? Let us know more about what you want to see on Recapo in the comments.