On April 9 2013, Jerry Springer tries to help couples that are caught up in some very strange lies. Junior told his girlfriend Melissa that his dog gave him hickeys on his neck. Sure, Junior. Then, a single mother is using her baby daddy as a babysitter so she can sleep with other men. That’s not dysfunctional at all.

Jerry Springer: Did Junior Make Out With His Dog? 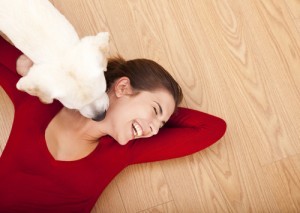 On April 9 2013, Junior says that his dog is responsible for the hickeys on his neck.

On this episode Junior is clearly cheating on his girlfriend Melissa. Melissa sees right through Junior’s sad and pathetic lies. Junior claims that the hickeys on his neck were from his dog.

First of all, Junior, why would your dog be sucking on your neck? That makes a lot of sense. Second, why did you let your dog do that? Junior’s story has so many holes it’s looking like swiss cheese.

Finally, the woman that did give Junior his love bites shows her face. She’s a single mom with a big libido. She says that single moms need love too.

Also on April 9, a single mom has been stepping all over her baby daddy’s kindness. She’s been sleeping with him so that he takes the kids whenever she asks. She doesn’t take that free time for shopping or relaxing, she’s been using it to see another man.

These baby daddies fight it out for their woman. I’m sure that she doesn’t need them. A master manipulator, this single mom would have a new babysitter in minutes.